We had a telephone conversation earlier today with Father Edward Krause, C.S.C., Ph.D., a member of CESJ’s Board of Counselors in residence at the University of Notre Dame in northern Indiana.  Despite being isolated in the wilds of academia, he has been able to insert ideas of the Just Third Way into some discussions.

• It's not a Justice University program per se (Justice University didn't produce it, but can "borrow" it) but episodes of Father Krause’s series on EWTN, Becoming Catholic, are available as free audio downloads from the EWTN website.  Obviously, much of the material is not directly related to the Just Third Way, but people of all faiths and philosophies should find some of the programs both interesting and useful, e.g., in these days of rampant divorce and changes in the meaning of basic terms, marriage as a “vocation,” that is, a calling in itself that requires work and effort, not just something that happens spontaneously.  The ninth episode, “The Moral Imperatives of Any Faith,” is actually a discussion of the Aristotelian-Thomist understanding of the natural law, something we’ve discussed at length on this blog.  As the blurb says, “Fr. Krause talks about how Morality is objective, and perceived by the Conscience through Natural Law.”  The twelfth episode, “The Eighth Commandment and the Media,” also looks interesting: “Fr. Krause talks about how bearing false witness has affected society today, on a small scale and a larger scale with the media.”  The entire series is also available on DVD (for a price) for those who want to see Father Krause’s smiling face. 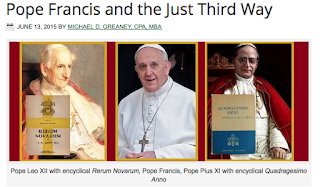 • Unfortunately, Father Krause was not able to attend the annual conference of the Society of Catholic Social Scientists due to a scheduling conflict.  As Chaplain, he was planning on distributing copies of CESJ’s recent article, “Pope Francis and the Just Third Way” for study and commentary.  Of course, there is nothing preventing anyone, even a Catholic social scientist, from visiting the Homiletic and Pastoral Review website and reading the article for him- or herself. . . .

• During the conversation, Father Krause again raised the issue of how to secure the economic and (at this point) political independence of the Family.  As Father Matthew Habiger, O.S.B., Ph.D., former head of Human Life International and current CESJ Board of Counselors member, always reminds us, strong families require a solid economic foundation, and the Just Third Way is (again, at this point) the only game in town.  Dr. Norman Kurland noted that, despite the shape academia is in (and is the source of many of the problems the world faces — cf. C.S. Lewis’s The Abolition of Man and That Hideous Strength for a non-fiction and fictional treatment of this, respectively), it only needs a few people to start the process of reform . . . if they start from the right principles.  The civil rights movement in the early 1960s, in which Norm played a part, was a case in point. 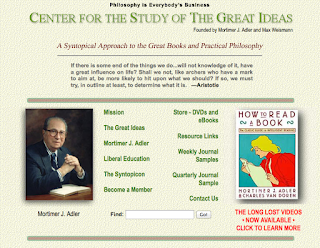 • The "Justice University" blog series, “Three Key Books on Common Sense” has proved astonishingly popular, and has received some very positive commentary (and some rather diversionary but thankfully irrelevant and immaterial negative commentary as well).  Noted Catholic commentator Father C. John McCloskey III, now in California (we met with him in Chicago a few years ago) stated he agreed with the series, while Max Weismann, co-founder with Mortimer J. Adler of the Center for the Study of the Great Ideas in Chicago, and Justice University faculty member has been very enthusiastic . . . as we might expect, due to our reliance on Aristotelian-Thomism and Adler’s analysis of modern philosophical errors (especially in academia).  The series is now in its second phase, covering Msgr. Ronald Knox’s book, Enthusiasm (1950), which seems to explain a lot of what can only be called “nuttiness” so prevalent in the modern world.  It will conclude with a look at Archbishop Fulton Sheen’s book, God and Intelligence in Modern Philosophy (1925), having started with G.K. Chesterton’s Saint Thomas Aquinas: The “Dumb Ox” (1933).  A number of people have suggested that the series be turned into a book at the earliest opportunity.

• This past week CESJ sponsored a luncheon for M. Jean-Marie Bukuru of Burundi, his family, and his “patron” in the United States.  Jean-Marie, a Fulbright Scholar and Hubert Humphrey Fellow, negotiated a multinational water rights treaty covering the Nile River Basin, and will be working to implement a Just Third Way program of resource management and economic development once the political situation is settled and it is safe to return to Burundi.  Naturally, “a good time was had by all,” and the special chicken and mushrooms with yellow rice was a particular success — perhaps one day we can put together that “Just Third Way Cookbook” someone suggested a while back.

• The CESJ core group will be attending the Law and Justice symposium the week of November 16th at the World Bank.

• As of this morning, we have had visitors from 52 different countries and 49 states and provinces in the United States and Canada to this blog over the past two months. Most visitors are from the United States, Canada, the United Kingdom, Australia, and the Philippines, and India. The most popular postings this past week were “Thomas Hobbes on Private Property,” “Halloween Horror Special XIII: Mean Green Mother from Outer Space,” “Aristotle on Private Property,” “Three Key Books on Common Sense, XI: The Awful Apparition of Aristotle,” and “Three Key Books on Common Sense, IV: Chesterton Versus the Slavery of Past Savings.”