In 1998 the late Dr. Ralph McInerny of the University of Notre Dame published What Went Wrong With Vatican II: The Catholic Crisis Explained.  This was an analysis of what, in his opinion, caused theologians and others to misinterpret and misapply the Council so egregiously: dissension over the encyclical Humanae Vitae.


With all due respect to Dr. McInerny, however, we do not think the issue of birth control and disappointment over the Church’s refusal to change fundamental teaching was the key event that triggered the oddities using the so-called “Spirit of Vatican II” as justification.

In our opinion, what happened immediately following the Council was a combination of two things.  One, the egregious and widespread misunderstanding of the social doctrine of Leo XIII and Pius XI, especially the latter’s breakthrough in moral philosophy as analyzed by Father William Ferree in The Act of Social Justice (1942).  Two, there was an opportunistic leveraging of the situation by modernists who had been laying low (so to speak), waiting for just such an opportunity. 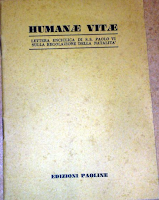 Yes, the issue of birth control was important.  It was, however, ultimately just another symptom of the underlying problem: the shift from reason to faith as the basis for understanding the natural law.  The theologians who managed to convince so many that fundamental Catholic teaching or the natural law could be changed, however, were already operating within a climate of dissent, and had been for more than a century before the Council even started.

Like the Scopes “Monkey Trial” and Roe v. Wade, the issue of contraception was intended as a stalking horse, a put-up job to start a domino effect weakening the Church’s moral and spiritual authority.  The theologians claiming that a change was coming were fully aware that no change was possible.

This had been going on for some time.  The First Vatican Council in fact, was (in part) called to bring the Catholic Church back to a reason-based understanding of the natural law and human society.  This was a concern Pius IX raised in his first encyclical, Qui Pluribus (“On Faith and Religion”) in 1846, and countless times thereafter, both in his record-breaking thirty-eight encyclicals and speeches and allocutions.

As we noted previously, the American attack from inside the Catholic Church appears to have begun in earnest with the revolt of Father Edward McGlynn and his championing of the agrarian socialism of Henry George in the 1880s.  In spite of the obvious contradictions and departure from the Aristotelian-Thomism that is the stated framework for understanding both Catholic theology and social teaching (and the fact that Father McGlynn fully recanted), modernism became accepted as unquestioned orthodoxy in Catholic social teaching.

In the United States, this was largely through the efforts of Monsignor John A. Ryan at the Catholic University of America, whose social, political, and economic theories were strongly influenced by georgist socialism and New Age thought.  In this way, the twin evils of theosophy and socialism became part and parcel of the “standard” understanding of Catholic social teaching.


Interestingly, Jacob Coxey, whose proposals are often cited as anticipating the New Deal for which Ryan expressed such enthusiasm, had theosophical “leanings,” meaning his vague Protestantism was influenced by New Age theories.  “Coxey’s Army,” which descended on Washington in 1894, demanded government job creation financed by inflation, among other things.

In Europe, beginning in France, this was primarily due to modernists using Leo XIII’s openness to working with the anti-Catholic civil authorities to bring the Catholic Church in that country up to date to be able to address pastoral issues and social problems more effectively.  This was taken as permission to change fundamental doctrines instead of adapting applications of unchanging and unchangeable principles of natural law and revelation to meet changing conditions.

Legitimate attempts to bring Church practice up to date were soon drowned in the efforts to invent and implement what amounts to a new concept of religion.  As a case in point, modernists and New Age partisans in Europe adopted the solidarism of Émile Durkheim, which was both fascist and socialist.

Going overboard, modernists also integrated a number of Durkheim’s innovative religious and philosophical concepts, e.g., that religion and morality can be explained in purely social terms, and that God is essentially irrelevant, citing Buddhism as a religion in which the concept of God is of little importance.  This made references to the spiritual insights of Buddhism a key element of New Age-influenced modernist Christianity — against which (in common with Chesterton) the Vatican has issued a number of warnings.

Father Heinrich Pesch, S.J., corrected the serious flaws in Durkheim’s theories.  He did this by reorienting Durkheim’s theories to conform to Aristotelian-Thomist principles, and removed the fascist and socialist elements.  Pesch also seems to have studied and been influenced by the “real” Americanism noted in Testem Benevolentiae Nostrae (1899), and taken note (as Leo XIII and, especially, Pius XI also seem to have done) of Alexis de Tocqueville’s analysis of Jacksonian America in Democracy in America (1835, 1840).

In particular, Pesch’s analysis of the role of groups bears a striking resemblance to de Tocqueville’s description of the role of associations (institutions) in American life of the day — so important a feature of American life that (as far as de Tocqueville was concerned), the central government hardly seemed to govern at all.  Pius XI’s act of social justice (which Pesch failed to discern) that seems to be based in part on this is an almost infinitely flexible way of applying the absolutely inflexible principles of individual justice by reforming institutions to meet human wants and needs.

The problem was, however, in common with Leo XIII, Pesch identified the problems, and gave a solution . . . but left out a specific means to bring about effective change: the act of social justice.  Further, as an economist, Pesch took the “past savings assumption” for granted.  That is, he assumed as a matter of course that the only way to finance new capital formation is to cut consumption below production, and accumulate the surplus in the form of money savings.

This locked solidarism into the same trap as distributism: sound principles and goals, but no way of implementing the principles or achieving the goals.  That meant an implicit reliance on the State as the source of all good.  As one latter day solidarist declared, “The State is the sole intercessor available to the poor.” (Dr. Rupert J. Ederer, “Solidaristic Economics,” Fidelity magazine, July 1994, 9-15.)

Forgotten in this frenzy of State-worship was the fact that the document many used to justify their position on an increased role for the specialized (and dangerous) tool of government, Rerum Novarum, stated the opposite in no uncertain terms:

“[M]an, fathoming by his faculty of reason matters without number, linking the future with the present, and being master of his own acts, guides his ways under the eternal law and the power of God, whose providence governs all things. Wherefore, it is in his power to exercise his choice not only as to matters that regard his present welfare, but also about those which he deems may be for his advantage in time yet to come. Hence, man not only should possess the fruits of the earth, but also the very soil, inasmuch as from the produce of the earth he has to lay by provision for the future. Man's needs do not die out, but forever recur; although satisfied today, they demand fresh supplies for tomorrow. Nature accordingly must have given to man a source that is stable and remaining always with him, from which he might look to draw continual supplies. And this stable condition of things he finds solely in the earth and its fruits. There is no need to bring in the State. Man precedes the State, and possesses, prior to the formation of any State, the right of providing for the substance of his body.”  (Rerum Novarum, § 7.)

Anyone with a modicum of “what common men would call common sense” (Chesterton, The Dumb Ox, op. cit., 145) would, “if it were suddenly propounded to his simplicity” (ibid.), instantly declare that the Catholic Church demands not an increased role for the social tool of the State, but a decreased role.  A social safety net provided by the State, yes, but the first recourse is genuine individual charity, not fake “social justice”:

“[W]hen what necessity demands has been supplied, and one's standing fairly taken thought for, it becomes a duty to give to the indigent out of what remains over. ‘Of that which remaineth, give alms.’  It is a duty, not of justice (save in extreme cases), but of Christian charity — a duty not enforced by human law.”  (Rerum Novarum, § 22.)