Enthusiasm, X: Where It Began

Yesterday, we looked at how efforts to avoid the consequences of assuming that the only source of financing for new capital formation is past savings, combined with the lack of understanding of the act of social justice, virtually ensured that the “orthodox,” reason-based, Aristotelian-Thomist concept of the natural law would — temporarily, we believe — go down before the forces of irrational faith, personal opinion, and the triumph of the will.  This is an example of Msgr. Ronald Knox called “enthusiasm” or “ultrasupernaturalism.” 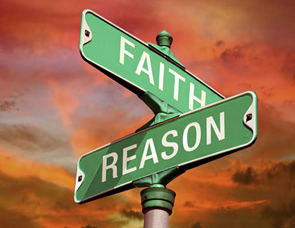 As a result, “Faith and Reason” became in most cases “Faith or Reason,” with people seemingly divided into those who went with the immaterial as the basis of the natural law, and those that went with the material.  Reason was left without a guide, and faith was left without a foundation.  In that environment, obviously, anything goes, as long as an individual or a group has a sufficiently large club with which to beat others into submission, er, accept the correct opinion(s).

The struggle in the Catholic Church after Vatican II (which mirrored what was happening in civil society and, eventually, the family) ended up being between two groups, both of which took a faith-based position unsupported by reason.  In broad terms, these were the individualists/capitalists, and the collectivists/socialists.

In Just Third Way terms, of course, both are wrong, and wrong for the same reason about the same things.  The only way to correct the situation is to show members of both extremes what is right, i.e., how future savings can be used to finance new capital formation and institutions reformed through acts of social justice.

The problem with that is that, as a rule, people at the extremes (and most people in the middle) have never learned to think, and so cannot truly discern right from wrong.  Instead, they follow the “inner light” G.K. Chesterton and Msgr. Ronald Knox deprecated.  The question then becomes, Where did it all go wrong?

It began, as always seems to be the case, in the universities — academia.  As was demonstrated during the English Reformation, Cambridge and Oxford were already to all intents and purposes Protestant before Henry VIII decided to “sever the tie with Rome,” as the euphemism generally goes.  As these were the pools from which the bishops of the Church in England were usually drawn, it is not surprising that only one, Bishop John Fisher of Rochester, had the courage and the intellectual honesty, as well as philosophical and theological acumen, to stand up to and resist the king’s innovations.

Ironically, Fisher had attempted a reform of academia through his almost single-handed administration of Cambridge.  Reform of institutions is, however (consistent with the laws and characteristics of social justice), necessarily a social, not an individual effort.  Consequently, everything Fisher accomplished as an individual to restore orthodoxy was quickly overturned with the Reformation and his execution.

Had Fisher organized with others in social justice at this time, however, the story of “the King’s Great Matter” might have been very different.  It could have been the history of a crisis averted, for (as Erasmus commented) “[Fisher] is the one man at this time who is incomparable for uprightness of life, for learning and for greatness of soul.” (Leonard Foley, Saint of the Day: Lives, Lessons & Feasts.  Cincinnati, Ohio: St. Anthony Messenger Press, 2009.)  Unfortunately, without the techniques of social justice — as Chesterton, Knox, and Sheen discovered — even the greatest individual virtue, learning, and strenuous efforts are insufficient and ineffective in making the necessary changes in institutions.

As an interesting note, purely by coincidence, Fulton Sheen (who, as we shall see, seems to have been assigned to the Catholic University of America to correct and counter John A. Ryan and reform the institution by returning it to orthodoxy in the area of social thought) was also a bishop of Rochester, albeit Rochester, New York.  Sheen, too, was (in a sense) martyred.  He later referred to that period at the Catholic University as "a great trial," tantamount to a crucifixion.

What happened following Vatican II was thus nothing new.  It had been preceded in microcosm in Catholic academia, which set the stage for widespread dissent prior to the Council and then validated the changes with self-serving and self-justifying circular arguments. We see something similar in the recent hysteria at Yale and the University of Missouri, which defies any definition of common sense or rational behavior.

The furor over contraception that Ralph McInerny identified as the heart of the problem was itself the result of Catholic academics attempting to put their heterodox theories into practice.  Even then, it was not so much the theories that had become entrenched in Catholic colleges and universities as a fundamental approach to Catholic teaching itself.  It was the fact that by the time of the Second Vatican Council, the abandonment of reason that led to the theories (that was, in part, why the First Vatican Council was called) had become established as the new orthodoxy in social thought.  Change for the sake of change was already the law in academia, as the demand for “original” research in order to obtain a Ph.D. to get a job made novelty instead of truth the measure and goal of scholarship.

From the Church’s social teachings, the “new things” rapidly spread to all of Catholic thought.  Even in institutions that gave lip service to faith and reason, reason as the foundation of faith either took second place, or was rejected altogether.  In this framework, faith alone is necessary, and it justifies itself.

Ironically, McInerny himself was aware of this.  As he explained in a book he wrote more than a decade before he published What Went Wrong With Vatican II in 1998,

One of the greatest dangers to the faith today is what the [Catholic] Church calls fideism. Fideism is the view that nothing that we know with unaided reason counts either for or against what we believe. Faith obeys radically different laws than reason, and the believer should not, indeed cannot, relate what he believes to what men (including non-believers) can know about the world. (Ralph McInerny, Miracles: A Catholic View. Huntington, Indiana: Our Sunday Visitor Publishing Division, 1986, 15.)

The wreckage that followed Vatican II, then, was simply another example of what Chesterton termed Siger of Brabant’s error of "the Double Mind of Man,” by which . . .

Thus, taking contradiction, novelty, and change as principles, both individualists and collectivists try to circumvent the slavery of savings and the necessity of the act of social justice for attaining and maintaining a just society in ways that seem different to them, but are curiously the same: the extremes of capitalism and socialism.  This left those in the vast muddled middle with the Welfare or Servile State to try and correct the flaws of the extremist positions.

The problem however (as Chesterton noted) was that, having abolished the idea of universal absolutes, both collectivist/socialists and individualist/capitalists “attacked what is immortal and immutable with a very curious kind of immortal mutability.” (Chesterton, The Dumb Ox, op. cit., 106.)  Thus, the presumed paradox of ownership by all for the good of all was “resolved” by changing the definition of property, and eventually the whole of the natural law, thereby replacing one great error with another, even greater error.

Obviously, Knox did not foresee the results of how enthusiasts would twist Vatican II into what amounts to a new concept of religion.  Neither could he predict how the aberrations of the social thought of Msgr. John A. Ryan and Fabian socialism would so forcefully seem to corroborate each other — although (as we have seen) coming from the same sources, such corroboration is simply an example of someone bearing witness to one’s self, and therefore invalid: “If I bear witness of myself, my witness is not true.” (John 5:31.)

What Knox did, though — and what is invaluable to us today — is delineate the characteristics of enthusiasm, and describe their errors in terms so clear as to leave no doubt as to what we see around us in what seems to be the wreck of civilization, even of religion and family.  And, knowing that, we can begin to organize in social justice to correct the problems.

First, however, we need to familiarize ourselves with “the enemy,” which (as usual) is more often bad ideas than bad people.  As Knox remarked in his dedication of Enthusiasm to Evelyn Waugh, he developed great sympathy with the people making the errors . . . although, like Chesterton, not accepting the errors themselves, some of which verge on the horrifying when they don’t appear utterly Satanic.  As Knox quoted a newspaper article from 1933 (that year again!),

“Eight members of a family of Kentucky mountaineers were lodged in jail to-day, charged with taking part in the ritual murder of Mrs. Lucinda Mills, aged 72. . . . Some of the arrested persons are reported to have told the police that they had received a divine command to make a human sacrifice and that the lot fell upon Mrs. Mills.  A son-in-law is alleged to have said that he wanted to prevent the sacrifice, but he had a feeling that he must not.”  (New York message in The Times, February 9, 1933, quoted in Knox, Enthusiasm, op. cit., 582.)

As Knox commented, “How are we to argue against such a ‘feeling’, if it is accompanied by the conviction that the inner light is something which no Bible, no Church, can legitimately gainsay?”  (Ibid.)