You Can Bank on It

Last week we got into a little discussion about Merrie Old England.  One individual started gushing about how so many inventions ’n stuff had come out of England, and wondered why this was so.  Of course, this particular individual was into Art & Literature, so wasn’t too clear on just which inventions she was talking about, but we got the general drift.
Her opinion was that there must be something extra-special about the English people that made them so inventive so that they came up with capitalism, the British Empire, and all kinds of good stuff like that.
Or not.
In any event, there is — in our opinion — one very good reason why Merrie Old England developed economically with such great rapidity, and why other countries lagged behind until the United States took off in the latter half of the nineteenth century.  And that reason?
The Old Lady of Threadneedle Street, a.k.a., “the Bank of England,” considered the first true central bank.
No, really.
The fact is, the English aren’t inherently better or worse than any other nationality.  People are people, or (in terms of Scholastic philosophy), all human beings are as fully human, and are human in the same way, as all other humans.  (That’s the principle of identity, by the way, the positive way of stating the first principle of reason.)
What the English had, at least at a critical period in time, was not better people, but better institutions, especially the social tool of the State, and most particularly a central bank.  Until 1844 the Bank of England was more or less able to do what a central bank is supposed to do.  That is, supply adequate liquidity (money and credit) to the private sector for economic development.  Central banks were not, contrary to popular myth, invented or intended to finance government.  That’s just an accident of history we’ve discussed at length on this blog before.
The Bank of England was established in 1694.  Almost immediately the English — that nation of shopkeepers — began a commercial expansion unrivaled up to that time.  This created demand, and inspired new inventions to produce marketable goods and services more efficiently and at lower cost.
The new machinery was so much more productive than human labor that England was producing its collective head off, and goods were piling up.  So, what did they do?
They went out and got themselves an empire, not in a fit of abstraction, but to get captive markets for English goods and services, and sources of raw materials to feed the incredible productive behemoth the country had become.  From the mid-eighteenth century to the mid-nineteenth century, unbelievable wealth poured into England, and goods and services flooded the world.  It was no coincidence that the British Crown turned over development of India to a private mercantile company, which held the subcontinent for a century before its misrule for profit caused the Great Mutiny, and the Crown imposed its misrule for politics.
There was just one problem.  No one thought to build mass consumption power into the people in the markets who were supposed to be consuming all those goods and services.  At the same time, government finance became less dependent on taxation, and more dependent on floating debt to be repaid . . . sometime.
How did that happen?  As a result of the owners of the machines not being able to consume anywhere near what they produced, and the owners of labor (and stomachs and bodies) not being able to produce anywhere near what they consumed. 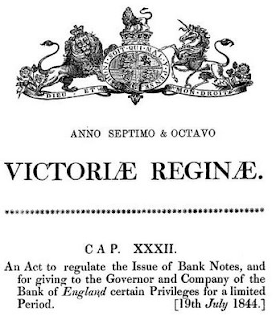 And how did that happen?  As a result of the owners of labor not being able to purchase the machinery that was taking away their ability to produce.  So, to take up the slack, government (and not just in England) began creating demand by issuing debt-money backed only by its own promise to pay in an effort to balance production and consumption.
Of course, the only rational way to balance production and consumption is to ensure as far as you can that every producer can consume what he or she produces, and every consumer can produce what he or she consumes.  That’s Say’s Law of Markets, which we’ve also covered in great detail a number of times on this blog.
Things began to get a little wonky . . . okay, a lot wonky.  The money supply of Merrie Old England never seemed to match the needs of commerce.  There always seemed to be either too much or too little.
The (rich) powers-that-be and the politicians decided that the problem was all those private sector commercial banks serving the financing needs of ordinary people by indiscriminately extending credit for private sector investment, especially capital projects.  Since the private sector could not be trusted to create the right amount of money by servicing its customers needs, the British Bank Charter Act of 1844 restricted all money creation to the Bank of England (or they thought it did, when it really didn’t; the framers of the Act didn’t understand money, banking, credit, or finance), with any increases coming from the import of gold, and any decreases coming from export of gold.
It worked like a magic charm, which is to say, not at all.  A series of currency crises hit Great Britain due to the money supply not having any direct connection to production, and consumers increasingly alienated from production, and producers from consumption.
In the space of twenty years, Great Britain’s commercial preeminence was in serious trouble.  At the same time, that of the United States was about ready to take off . . . and start making the same mistakes Great Britain had made.
#30#
Posted by Michael D. Greaney at 6:00 AM