As the situation continues to deteriorate nationally and internationally, and the long slide to moral relativism and nihilism (to say nothing of capitalism and socialism and ismism) continues, the number of surreal incidents and just plain nuttiness accelerates to what, without the act of social justice and the principles of economic justice, would be the point of no return.  Just keep the Just Third Way in mind as you read this issue of New from the Network if you want to retain your sanity: 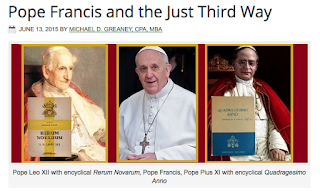 • A subject that has been addressed many times on this blog and in last year’s article in Homiletic and Pastoral Review, “Pope Francis and the Just Third Way”: is it possible to be both a good person and a good citizen?  A recent sermon preached by Rev. Tommy Nelson, pastor of Denton Bible Church in Denton, Texas, on October 23, 2016, addresses this issue.  It’s a bit lengthy, it separates reason and faith, the history is a bit off, and you will have to filter through the Evangelical Christian “language,” but the concerns are valid.  The sermon is titled, “Continental Divide” and it might be worth a view.  Of course, it is essential to keep in mind that without the laws of social justice and the principles of economic justice, a real solution is impossible; we disagree with Rev. Nelson that people are helpless in the fact of unjust or unnatural governments or other institutions, our own tools gone wild, and ultimately the only thing you can do is pray and wait for the Second Coming.  The laws of social justice and the principles of economic justice can be found in the social doctrine of Pope Pius XI and CESJ’s Capital Homesteading proposal, respectively.

• As if to provide a graphic illustration of the trend of modern society, a professor of literature at a small Catholic college in Rhode Island has been the object of student protests over the professor’s adherence to “traditional” (i.e., natural law) standards and beliefs — and the college administration sided with the protestors and against the teachings of the Catholic Church in the name of “diversity.”  The story is related in an interview with journalist Rod Dreher published in The American Conservative, “Tony Esolen Contra Mundum” (“Tony Esolen Against the World”).  It might seem a bit pretentious or apocalyptic to use the same phrase used to describe the Fourth Century struggle of Saint Athanasius against the Arian heresy, but consider: had Arianism won the religious struggle, Christianity as something distinct from traditional paganism would have disappeared (for reasons that we won’t go into today or, hopefully, ever).  Similarly, if Dr. Esolen suffers adverse consequences for supporting traditional moral values, it will not be decisive in and of itself, but it will add to the avalanche of moral relativism and nihilism, especially in Academia, that is so close to destroying the natural law basis of society completely.
• Shades of Aldous Huxley’s Brave New World, in which the word “mother” is an obscenity, and “father” an off-color joke.  Just when you thought things couldn’t get any more surreal, in an October 16, 2016 article in the Toronto Sun, “Wynne Government Targets ‘Mother’ and ‘Father’,” by Joe Warmington, it is reported that “Ontario” (meaning the government of Premier Kathleen Wynne, “the least popular premier in Canada”) wants to remove the words “father” and “mother” from the law code in the name of “diversity,” and substitute up to four undifferentiated “parents.”  In other areas, universities are urged to adopt “inclusive language” that excludes traditional definitions and beliefs, the University of New Hampshire has issued a “bias free language guide” that is biased in favor of moral relativism, meaninglessness, and nihilism, and, on the grounds that open discussion of same sex marriage leads to suicide, the demand has been made that the Australian Parliament should decide the issue unilaterally without a plebiscite.  We’re still trying to figure out the logic of that last one.

• Mark Gross, O.P., editor and publisher of Truth Be Told, the newsletter of the Province of the Most Holy Name of Jesus, Western Province Dominican Laity, has requested permission to republish yesterday’s blog posting, “Faux Solidarism and the Totalitarian State.”  “Faux Solidarism” is one of a number of recent blog postings that have generated a great deal of interest and, possibly, some soul-searching among people whose assumptions and “facts” are questioned at the most fundamental level.  By the way, subscriptions to Truth Be Told are free.
• For some time on this blog we’ve been claiming that modernism, New Age thought, and socialism pervade today’s society at all levels.  Yesterday, an article appeared on Tony Perkins’s Washington Update website, “Plenty of Question Marx About Millennials.”  The article zeroed in on the many people today who have favorable views of Marxism, and who have whitewashed or “improvised” history to conform to Marxist rhetoric, e.g., the stunningly ludicrous claim that George Bush as president killed more people than Stalin.  Making the situation even worse, the article highlighted only Marxist socialism, and did not address the pervasiveness of the presumably more moderate Fabian socialism and its offshoots that are embodied in the modern Welfare State.
• On Wednesday evening, November 2, members of the CESJ core group had a meeting with a young political hopeful and his wife.  A number of topics were covered, but the discussion centered on taxation, especially CESJ’s single rate tax proposal versus the Marxist heavy and progressive tax specifically intended to destroy private property.  The hopeful did not appear to be convinced of the justice or the practicality of CESJ’s proposal, but it is not clear that he completely understood it, either.
• On Monday, the CESJ core group had a lunch meeting with a staff member of a key conservative Congressman.  Obviously we can’t give any information, except to say that the staffer seemed impressed with the consistency of the Just Third Way with his boss’s position.
• CESJ’s latest book, Easter Witness: From Broken Dream to a New Vision for Ireland, is available from Amazon and Barnes and Noble, as well as by special order from many “regular” bookstores.  The book can also be ordered in bulk, which we define as ten copies or more of the same title, at a 20% discount.  A full case is twenty-six copies, and non-institutional/non-vendor purchasers get a 20% discount off the $20 cover price on wholesale lots ($416/case).  Shipping is extra.  Send enquiries to publications@cesj.org.  An additional discount may be available for institutions such as schools, clubs, and other organizations as well as retailers.
• Here’s the usual announcement about the Amazon Smile program, albeit moved to the bottom of the page so you don’t get tired of seeing it.  To participate in the Amazon Smile program for CESJ, go to https://smile.amazon.com/.  Next, sign in to your account.  (If you don’t have an account with Amazon, you can create one by clicking on the tiny little link below the “Sign in using our secure server” button.)  Once you have signed into your account, you need to select CESJ as your charity — and you have to be careful to do it exactly this way: in the space provided for “Or select your own charitable organization” type “Center for Economic and Social Justice Arlington.”  If you type anything else, you will either get no results or more than you want to sift through.  Once you’ve typed (or copied and pasted) “Center for Economic and Social Justice Arlington” into the space provided, hit “Select” — and you will be taken to the Amazon shopping site, all ready to go.
• As of this morning, we have had visitors from 50 different countries and 45 states and provinces in the United States and Canada to this blog over the past two months. Most visitors are from the United States, Canada, the United Kingdom, South Africa, and Germany. The most popular postings this past week in descending order were “Thomas Hobbes on Private Property,”  “Aristotle on Private Property,” “Popes are the Craziest People,” “The Purpose of Production,” and “A Brief Discourse on Social Credit, I: What IS ‘Social Credit’?”
Those are the happenings for this week, at least those that we know about.  If you have an accomplishment that you think should be listed, send us a note about it at mgreaney [at] cesj [dot] org, and we’ll see that it gets into the next “issue.”  If you have a short (250-400 word) comment on a specific posting, please enter your comments in the blog — do not send them to us to post for you.  All comments are moderated, so we’ll see it before it goes up.
#30#
Posted by Michael D. Greaney at 10:01 AM