Solidarism and the Just Third Way, I: Three or Four Pillars?

Today we start to look at how well solidarism as understood by Father Heinrich Pesch, S.J. (not Émile Durkheim) and CESJ’s Just Third Way fit together.  Both claim to be based on an Aristotelian-Thomist interpretation of Catholic social teaching — and thus of the natural law — and therefore should come to the same conclusion(s), even if by (slightly) different routes.
The first thing we note is that where CESJ talks about “four pillars of a just market economy,” Father Pesch spoke of “three pillars of economic society.”  If you’re the nitpicking, quibbling type, you will instantly make the claim that what CESJ and Father Pesch are talking about are two different things, and never the twain shall meet. 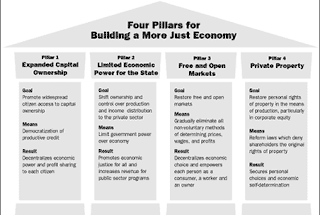 Our more astute readers, however, will want to compare CESJ’s four pillars with Father Pesch’s three pillars, and see if there’s any overlap or omissions.  So, just for comparison:

Putting Father Pesch’s solidarism and the Just Third Way side by side like that, the first thing we see is that there is a much closer correlation than we might otherwise think.  The main difference seems to be in basic orientation and underlying assumptions.  That’s not the precepts of the natural law, of course.  The differences are clearly matters of semantics and specific emphasis, not contradictions.
For example, many people (including Father Pesch) would combine “free and open markets” and “a limited economic role for the State.”  Yes, what CESJ does is in a sense redundant, but you’ll see why we separate them when we get to explaining them in a future posting.
It seems evident, for example, that Father Pesch’s use of the word “interference” (a negative term) is more comprehensive than “a limited . . . role.”  Yes — and it gives more room for misinterpretation by people who insist that complete State control isn’t interference, you know.  It’s just the State carrying out its proper function to control everything and everybody from cradle to grave.  Interference?  Certainly not!  It’s the thing to do when you’ve transformed a social tool, the State, into a “Mortall God.”
Similarly, Father Pesch’s “private property” is broader than “restoration of private property” and “widespread ownership of capital.”  Again, however, Father Pesch’s pillar begs the question: ownership of what by whom?  From a natural law perspective, of course, it is clear that Father Pesch meant ownership of capital by everyone with the full rights of ownership . . . but that’s not how many people today, who have lost their natural law grounding, would take it.
Finally, why did CESJ leave “marriage and family” off its list of pillars?
Uuuh, because we didn’t think of it?
No, because marriage and family are given in CESJ's Core Values as fundamental institutions, essential components of a just market economy, but they are not themselves natural persons — and the four pillars relate exclusively to natural persons, to individuals, not society in any form.  As Pius XI stated it, "Only man, the human person, and not society in any form is endowed with reason and a morally free will."  (Divini Redemptoris, § 29.)  Society was made for man, not man for society.

We list marriage and family first among the important institutions that support and maintain the dignity and sovereignty of the human person under God . . . but they are not themselves human persons!  They therefore do not really belong on a list of pillars of a just market economy, as that pertains solely to human beings as "natural persons," i.e., to their status in society.

To get technical, marriage and family are institutions in domestic society, generally sanctioned and sometimes governed by religious society, and affirmed and protected — but not controlled — by civil society.  They are intended to support and help maintain the dignity and sovereignty of the human person.  CESJ’s primary area of concern is the sovereignty of the human person in civil society, not his or her place in domestic or religious society, except insofar as they function as economic or educational units and overlap into civil society.
Getting more specific than that about domestic society and religious society is outside CESJ’s area of competence.  CESJ recognizes that parents have authority in purely domestic matters, while religious teachers have authority in purely religious matters.  The areas of interaction for CESJ and religious and domestic society are the broad areas of overlap with civil society — which is where CESJ has competence.  As long as no one’s civil or natural rights are violated, CESJ has nothing to say about religious or domestic life.
Tomorrow we’ll start looking at the pillars themselves — however you number them.
#30#
Posted by Michael D. Greaney at 6:00 AM