How to Become President

On Monday, July 25, 2022 (halfway to Christmas), Senator Elizabeth Warren of Massachusetts published an article on page A-17 of the Wall Street Journal, “Jerome Powell’s Fed Pursues a Painful and Ineffective Inflation Cure.”  We can agree with the title, and even several things Senator Warren says, but end up disagreeing with the article taken as a whole.  Warren identifies a part of the problem, but then analyzes it using a very flawed paradigm, and offers exactly the wrong solution, or (more accurately) non solution. 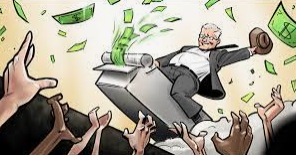 Warren’s solution is that instead of trying to dampen inflation, what we really need is more inflation.  With high inflation, so she claims, we get full employment, lots of money to spend, and a healthy rate of economic growth.  Inflation is not the enemy, it’s our friend.

Her analysis is clearly framed within the long-disproved Keynesian tradeoff between inflation and unemployment, based on the equally disproved Keynesian assumption that only labor is productive, and capital only provides the environment within which labor can be productive.  If someone wants income, he or she must have a job to get wage income, or the government will have to provide welfare payments.

What if a factory is completely automated and there are no jobs?  It turns out that just as a herd of cattle can increase without any human input whatsoever, and fruit trees ditto, a fully automated factory can keep on producing even if all the human beings have disappeared.

Klaus Schwab’s “Great Reset” attempts to solve this problem by maintaining that if the rich just redistribute a modicum of wealth, people won’t need jobs or welfare, but that causes other problems, which address in our new book (free plug), The Greater Reset: Reclaiming Personal Sovereignty Under Natural Law, which (of course) you should purchase immediately and write a laudatory review so my co-author and I can sell more books.  And never fear.  Even though the book is put out by a “Catholic” publisher, the authors have pledged that not one cent will of their royalties will be used for anything except to gratify their own personal wants and needs.

So, while Warren’s solution is somewhat less than adequate (and was completely demolished by Dr. Harold G. Moulton is a pamphlet he wrote nearly eighty years ago), she at least called attention to the problem.  Not only that, there is already the basis of a solution, and it’s one that was made possible (just barely) by a Democratic Congress under a Democratic president spearheaded by two noted Democrats.  Okay, so it lasted two years before the Democratic administration sabotaged it for political purposes, but the framework for a solution is still in place.

Following the “Bankers’ Panic” of 1907, the American people again demanded that the government do something about the grossly inadequate financial system that had plagued the country since before the Revolution.  One of the chief complaints the colonists had about Great Britain was the refusal to provide adequate “accommodation” for industry, agriculture, and commerce, i.e., a sound and adequate monetary and financial system.  “Chaotic” was a good description of what was going on.   Of course, just as the American colonists had freer exercise of their rights than most Englishmen (which is not to say that they were what they should have been), the lack of a sound financial system was also a serious problem in Great Britain and would remain so even after the “New Coinage” reforms of 1817 were implemented.

Most egregiously, the United States lacked a true central bank.  Three previous attempts to establish one (the Bank of North America under the Articles of Confederation and the First and Second Banks of the United States under the Constitution) had been effectively sabotaged, and the country was limping along with a quasi-central banking system, the National Banks, established under the National Banking Act of 1863.

The National Banks were not allowed to function as a true central banking system, however, as the amount of reserve currency available was fixed by law and could not expand or contract with the needs of the economy; it was “inelastic.”  There was also the problem that there were three reserve currencies circulating.  These were the United States Notes, the National Bank Notes, and the Treasury Notes of 1890.  While after 1879 these were all convertible into gold on demand, they were all backed by government debt instead of private sector assets.  In a bizarre twist, the federal government could have retired the entire national debt several times in the nineteenth century but refused to do so on the grounds that they needed the debt to back the reserve currency — which is not permitted under the Constitution.

After a series of financial panics and Great Depressions, Congress finally got its act together in 1913.  Under the leadership of Congressman Carter Glass and Secretary of State William Jennings Bryan the Federal Reserve was born.  One of the primary concerns was to take concentrated control over money and credit out of New York City (meaning out of the hands of J.P. Morgan) and spread it out across the country.

There would also be a shift from an inelastic, government debt-backed reserve currency, to an elastic, private sector asset-backed reserve currency.  The Federal Reserve would also oversee clearinghouse operations (Morgan had caused the Panic of 1907 by cutting another bank off from clearinghouse privileges) and, above all, provide adequate liquidity and circulating media for private sector industry, agriculture, and commerce.

To retire the debt-backed reserve currencies and replace them with a new, asset-backed reserve currency, the Federal Reserve was empowered to deal in secondary issuances of government debt.  The idea was to de-monetize government debt, and monetize private sector assets, thereby ensuring that there was always enough money and credit in the system, no more, no less; there would be neither inflation nor deflation.

That lasted for two years until the U.S. got into World War I and the politicians decided to finance the war using debt instead of raising taxes.  That debt had been largely retired when along came the Crash of 1929 and the Great Depression . . . and Keynesian economics that insisted all money, must be backed by government debt so that the government could control the economy and ensure that the system ran perfectly.

And how’s that working out for you?

Anyway, it’s clear that the mechanism exists to get us out of the current economic sinkhole.  All it needs is a few twists, described in the proposed Economic Democracy Act.  Frankly, the biggest change will be to phase out monetizing government debt and create new money in ways that turns non-owners into owners, thereby restoring Say’s Law of Markets and eliminating both inflation and deflation.

No, inflation is not our friend, and we don’t need either it or deflation.  So, if you want to grow up to be president, work to implement the Economic Democracy Act.  It's certainly better than making a bunch of promises you and others know you have no intention of keeping.