Something For Which to Be Thankful

Seriously?  You’re reading this blog on Thanksgiving Day?  You haven’t got anything better to do?  Well, be that as it may, we thought we’d just give you a little something for which you can be thankful . . . besides the election being over, that is.
To begin with, things might seem bad, but (small comfort) it could be worse.  The fact is there is a solution . . . not to your specific problems, but to the system within which you have to solve your problems, and the accessibility of the means to solve those problems.
This is, in fact, what “social justice” is all about: not solving specific problems, but fixing the system by means of which you can solve problems.  Once you have the right tools, and the system (a “social tool”) is working properly, you can get to work solving your own problems through your own efforts.
That’s the social justice part of what you can be thankful for.  If you’d like more specifics, download a free copy of Introduction to Social Justice, a pamphlet by CESJ co-founder Father published in 1948, a condensation of his doctoral thesis, The Act of Social Justice (1941, ©1943) — which, if you’re really hardcore, you can also download and read.
Now for the economic justice part of what you can be thankful for.  We won’t go into all the technicalities here.  If you want, you can check out the CESJ website for much, much more than you will get in this posting.

It’s called “Capital Homesteading.”  It’s a way to make every child, woman, and man an owner of capital.  Why is that important?  Most immediately, it opens up a way for people to gain income from capital as well as labor.  As wage rates rise, making labor more expensive relative to capital, owners of capital either replace human workers with more capital, or transfer jobs to lower wage areas.  Owners of capital continue to make money, but owners of labor are left out in the cold.
The most important thing, however, is that being an owner of capital means you have power.  As Daniel Webster said nearly 200 years ago, “Power naturally and necessarily follows property.”  Yes, income is critical, but it always depends on whoever owns capital.  If you don’t own capital, you are pretty much owned by those who do own capital.
This, in fact, is the chief problem with all forms of socialism.  Because people only own in socialism if the State allows it, they don’t really own.  No one has any power.  Only the State, which owns everything, has power.  The State (a social tool) becomes, in the words of the totalitarian philosopher Thomas Hobbes, a “Mortall God.”
So how do we make everyone an owner of capital without redistributing existing wealth, or redefining what property and ownership mean?  Capital Homesteading.
Capital Homesteading for every citizen offers a private property and free market-oriented alternative for saving the Social Security System as a national retirement income security plan.  But, at the same time, the Capital Homestead Act offers a new national policy to foster life-long  “capital self-sufficiency” as a means to achieve true economic independence for all Americans. If implemented, capital ownership would be systematically de-concentrated and made directly accessible to every person, without reducing property rights of the wealthy.
Through the Capital Homestead Act, access to asset-backed money and capital credit — which today helps make the rich richer — would be enshrined in law as a fundamental right of citizenship, like the right to vote.
Using its powers under Sec. 13, para. 2 of the Federal Reserve Act, the Federal Reserve System would supply local banks with the money needed by businesses to grow. The new money and credit for private sector growth would, however, be “irrigated” through Capital Homestead Accounts and other economic empowerment vehicles.
Through a well-regulated central banking system and other safeguards (including capital credit insurance to cover the risk of bad loans), you and all other citizens could purchase with interest-free capital credit, newly issued shares representing newly added machines and structures. (See how to structure safeguards) These purchases would be paid off with tax-deductible dividends of these companies. Nothing would come out of your pocket or reduce the income you use to put food on your family’s table.
Capital Homestead reforms would simplify today’s overly complex and unfair tax system by substituting a single-rate tax on non-exempt personal incomes from all sources, while:
1.     paying from general revenues all entitlements and other government spending at present levels,
2.     eliminating the payroll tax on workers and employers,
3.     making dividend payouts deductible to corporations, and
4.     balancing the budget.
The Capital Homestead Act would re-write and radically simplify the existing Federal tax system to automatically balance the budget. Its tax reforms would keep more money in the pockets of taxpayers from their initial earnings to cover their own health, education, housing and other basic household living expenses. CHA tax reforms would make Congress more directly accountable and responsive to all taxpayers.
While encouraging corporations to issue new shares to finance their growth and pay out all dividends on their shares, the Capital Homestead Act would eliminate all tax provisions, personal deductions, tax credits, and exemptions (except for the front-end exemptions for adults and dependents) that unjustly discriminate against or discourage property accumulations and investment incomes for poor and non-rich families. 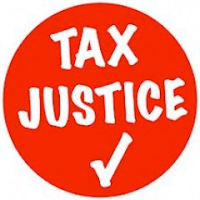 A single tax rate on all sources of labor or capital income over exemptions would be automatically set to meet all Federal entitlement and other programs, and to pay down past deficits. To meet personal living costs the basic incomes of all taxpayers up to $30,000 per adult and $20,000 per dependent (or $100,000 for a family of four) would be free from any income or payroll taxes. To increase taxable income incomes for all citizens, corporations could escape from the multiple tax on corporate incomes by deducting dividend payouts.
For example, under the reforms proposed here, a “typical” family of two adults and two children would pay no tax of any kind until aggregate income exceeded $100,000 ($30,000 of exempt incomes per adult and $20,000 per dependent). This family would pay a single rate of approximately 48% on any income over its $100,000 exemption. The 48% rate on incomes above exemption levels would apply to all forms of income — whether from wages, dividends, capital gains, etc. This is less than what dividend and capital gains income would be taxed currently under the “double (sometimes triple) tax” of up to 50% (35% corporate tax rate plus 15% on dividends and capital gains).
In contrast to the present system, a single tax covering incomes from dividends, interest, rents, and inflation-indexed capital gains would enable the over-burdened Medicare and Social Security systems to be funded out of general revenues. The single tax rate would drop significantly with a broadening of the tax base, as all citizens begin to receive substantial dividend incomes through their Capital Homestead accounts and as entitlements (constituting two-thirds of the current budget) can be radically reduced after keeping all current entitlement promises.
Under the Capital Homestead Act, the wealthy would be encouraged to break up the estates they leave to their heirs, so that wealth would not keep concentrating from generation to generation. Rather than taxing the estate, the recipient/s of the estate would be taxed over a certain amount (say $5 million) on what they receive through inheritance.
Thus the wealthy person could avoid all estate and inheritance taxes if he or she leaves the estate to many people, such as relatives, friends, employees, etc. The recipients could further shelter their portion of the inheritance from taxation if they roll the assets into their tax-sheltered Capital Homestead Account.
The Capital Homestead Act proposes a number of ownership empowerment vehicles that would enable every man, woman and child to get interest-free capital credit through their local bank. You and every member of your family could get access to this special credit by setting up a tax-sheltered Capital Homestead Account (CHA) — like a “Super-IRA” — at your local bank.
Through your CHA, and with the guidance of your financial advisor, you could purchase with your capital credit part ownership in: 1) companies for which a member of your family works; 2) a company where you have a monthly billing account; or 3) “qualified” companies that are well-managed and highly profitable, like Microsoft, Exxon-Mobil, Proctor & Gamble, IBM, etc.
Future earnings of the capital purchased would pay off the loans, including bank service fees and premiums to cover capital credit default insurance.
Within a relatively short period of time, you would become a full owner of your shares. For the rest of your life, you would receive a decent and regular income from the earnings of the capital you accumulate over the years. Then you would have income-producing property to pass on to your children. This is how Capital Homesteading works.
See? There really is something for which to be thankful.  Now go watch the game or eat dinner.
#30
Posted by Michael D. Greaney at 6:00 AM