It’s been a few weeks since the election, and a great many people still don’t know what to make of President-elect Trump.  We can’t say that we do, either, but we know one thing: whoever is in the White House, if he or she doesn’t have the Just Third Way and Capital Homesteading, the only thing the American people will have is more of the same, only more so.  To keep that from happening, here are this week’s happenings:


• At the CESJ Executive Committee meeting on Monday of this week, there was some discussion on how to make the new administration of President-elect Trump aware of the Just Third Way and Capital Homesteading.  It was decided that the subject needed more discussion than was possible in a business meeting, and a special meeting was scheduled.
• Intern Eliza R. had Norman Kurland in to lecture to the Brigham Young University Washington Seminar on the Just Third Way.  A number of the students asked some very insightful, even provocative questions, demonstrating that they had read the assigned material ahead of time.
• Norman Kurland spoke with a local politician with ties to a nearby Catholic college.  The politician said he was impressed with Norm’s analysis of the pro-life movement, and agreed that a Just Third Way approach might help fill a gap in the economic and political strategies in ways that can appeal to all people.  The politician expressed great interest in the work of William Winslow Crosskey (1894-1968), whose book, Politics and the Constitution in the History of the United States (University of Chicago Press, 1953), details how the U.S. Supreme Court expanded judicial review far beyond the bounds intended by the framers of the Constitution first in an effort to preserve slavery, then to assert the Court’s power over Congress, making the Court the final arbiter on legislation with the power to create law as well as adjudicate disputes.
• Dave M. in Hartford, CT, reported he has formed a core group to start a CESJ chapter there.
• This past Tuesday, CESJ heard from the acquisitions editor of a Catholic publisher indicating that the publisher might be willing to discuss an exclusive distribution agreement for Easter Witness (below). 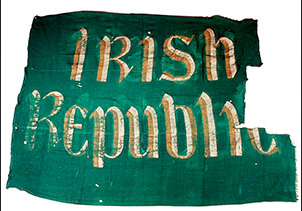 • CESJ’s latest book, Easter Witness: From Broken Dream to a New Vision for Ireland, is available from Amazon and Barnes and Noble, as well as by special order from many “regular” bookstores.  The book can also be ordered in bulk, which we define as ten copies or more of the same title, at a 20% discount.  A full case is twenty-six copies, and non-institutional/non-vendor purchasers get a 20% discount off the $20 cover price on wholesale lots ($416/case).  Shipping is extra.  Send enquiries to publications@cesj.org.  An additional discount may be available for institutions such as schools, clubs, and other organizations as well as retailers.
• Here’s the usual announcement about the Amazon Smile program, albeit moved to the bottom of the page so you don’t get tired of seeing it.  To participate in the Amazon Smile program for CESJ, go to https://smile.amazon.com/.  Next, sign in to your account.  (If you don’t have an account with Amazon, you can create one by clicking on the tiny little link below the “Sign in using our secure server” button.)  Once you have signed into your account, you need to select CESJ as your charity — and you have to be careful to do it exactly this way: in the space provided for “Or select your own charitable organization” type “Center for Economic and Social Justice Arlington.”  If you type anything else, you will either get no results or more than you want to sift through.  Once you’ve typed (or copied and pasted) “Center for Economic and Social Justice Arlington” into the space provided, hit “Select” — and you will be taken to the Amazon shopping site, all ready to go.
• As of this morning, we have had visitors from 62 different countries and 50 states and provinces in the United States and Canada to this blog over the past two months. Most visitors are from the United States, the United Kingdom, Russia, Canada, and Italy. The most popular postings this past week in descending order were “Thomas Hobbes on Private Property,”  “Aristotle on Private Property,” “The Feast of Christ the King?!?!?!?!?(!),” “The Purpose of Production,” and “News from the Network, Vol. 9, No. 42.”
Those are the happenings for this week, at least those that we know about.  If you have an accomplishment that you think should be listed, send us a note about it at mgreaney [at] cesj [dot] org, and we’ll see that it gets into the next “issue.”  If you have a short (250-400 word) comment on a specific posting, please enter your comments in the blog — do not send them to us to post for you.  All comments are moderated, so we’ll see it before it goes up.
#30#
Posted by Michael D. Greaney at 12:45 PM