This past Monday we addressed the problem of the “Automatic Gainsayer” who keeps insisting that (in our example) Country Y is so corrupt that we could never institute Just Third Way reforms, especially of the financial and tax systems.  For the sake of the argument, we demonstrated that even if the reforms turned out to be impossible from the top down — which, with the right leader, is a non-issue — it would still be possible to institute reforms from the bottom up. 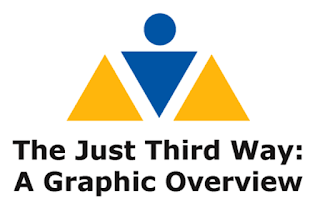