Easter Witness: From Broken Dream to a New Vision for Ireland

FOR IMMEDIATE RELEASE
Arlington, Virginia, Sunday, April 24, 2016. On Easter Monday, April 24, 1916 at around noon in Dublin, the capital of Ireland, a small band of men and women marched through the streets and occupied key points in the city, including the General Post Office (GPO) in the center of town. To the bafflement of onlookers, a man came out, stood in the portico of the GPO, and proclaimed that Ireland was now a republic, declaring “the right of the people of Ireland to the ownership of Ireland.” 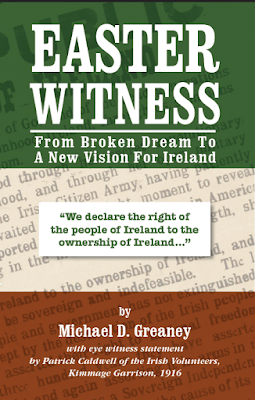 Thus began the “Easter Rising” that signaled the beginning of the end of the British Empire. A century later, the people of Ireland still await complete fulfillment of the vision of the men, women, and even children who challenged the might of the greatest empire the world has ever known.
On this Centenary of the Rising, Economic Justice Media’s Easter Witness: From Broken Dream to a New Vision for Ireland presents a concise overview of the Rising and its aftermath, and traces the century-long series of events that led a small band of Nationalists to reassert the sovereignty of every child, woman, and man in a free and independent Irish Republic. Of special interest to students of the Rising is the chapter consisting of the first-hand account of Patrick Caldwell of the Irish Volunteers, Kimmage garrison, who was in the GPO during the Rising, and was later involved in the War of Independence.
What causes Easter Witness to stand out among the many excellent, even exceptional works that have appeared in this Centenary year, and makes the book uniquely relevant for today, however, is the concluding proposal to establish equal capital ownership opportunity for every citizen. By securing the basic human rights of life, liberty, and access to private property for its own people, Ireland can become a global model for the 21st Century and a vision of hope for people everywhere. As Michael Davitt, founder of the Irish National Land League and associate of League president Charles Stewart Parnell, declared, “The cause of Ireland is the cause of humanity.”
A joint project of the interfaith Center for Economic and Social Justice (CESJ) and the Colonel John Fitzgerald Division Arlington County No. 1 of the Ancient Order of Hibernians, Easter Witness is an important contribution to the literature of the Rising. Working from many formerly unavailable original source documents, including contemporary newspaper reports and the “Statements By Witnesses” collected by the Irish Bureau of Military History, 1913-21, author Michael D. Greaney, CESJ’s Director of Research, has analyzed the events leading up to the Rising and its aftermath from CESJ’s “Just Third Way” perspective. This is based on the three principles of economic justice (participative justice, distributive justice, and social justice), and the four pillars of an economically just society (limited economic role for the State, free and open markets, restoration of the rights of private property, and expanded capital ownership).
Economic Justice Media’s Easter Witness, ISBN 978-0-944997-12-3, cover price $20.00, is available on-line from Amazon, and by special order from selected other bookstores. Quantity discounts are available for schools, churches, and civic groups.
Contact: