To understand what G.K. Chesterton did in 1933, we have to go back a decade to understand what he did in 1923.  That was the year, soon after his conversion to Catholicism, that Chesterton published what many consider one of his four (or five) greatest books: St. Francis of Assisi.  He seems to have felt it was his duty as a Catholic to present St. Francis, one of the most popular saints among non-Catholics, in a proper light, especially in an age that held St. Francis up as an exemplar for all the wrong reasons.


Being familiar with the mixture of false spirituality and counterfeit humanism found in Fabian socialism — a blend of expanded georgist socialism and theosophy — Chesterton tried to make it clear that there are three ways of looking at St. Francis.  1) View St. Francis as the ideal socialist, who showed how to attain the earthly paradise by foreshadowing the Fabian program of reaching perfection through pacifism, vegetarianism, and simple living.  2) View him as the ideal spiritualist or theosophist, who showed how to attain the heavenly paradise by rejecting the material world completely and raising one’s consciousness to higher levels.

The third way?  The way Chesterton took?  To reconcile the seeming contradiction of a man in love with the world yet who turned his back on it to pursue a greater love of God, and a man of faith who never lost sight of the importance of reason.  As Chesterton concluded, commenting on those who had distorted the message of St. Francis in prior centuries (and drawing an obvious parallel with those of the modern age duplicating their efforts),

Every heresy has been an effort to narrow the Church.  If the Franciscan movement had turned into a new religion, it would after all have been a narrow religion.  In so far as it did turn here and there into a heresy, it was a narrow heresy.  It did what heresy always does, it set the mood against the mind. . . . And it is a fact that the mood itself degenerated, as the mood turned into a monomania.  A sect that came to be called the Fraticelli declared themselves the true sons of St. Francis . . . . In the name of the most human of saints they declared war upon humanity. . . . What was the matter with these people was that they were mystics; mystics and nothing else but mystics; mystics and not Catholics; mystics and not Christians; mystics and not men.  They rotted away because, in the most exact sense, they would not listen to reason.  And St. Francis, however wild and romantic his gyrations might appear to many, always hung on to reason by one invisible and indestructible hair.  (G.K. Chesterton, St. Francis of Assisi.  New York: Image Books, 1957, 154-155.)

In other words, at least as far as Chesterton was concerned, St. Francis took his stand on the side of the primacy of the Intellect, not the Will, of knowledge over opinion, of a sane faith based solidly on reason, not the insanity of a false mystical spirituality contradicting or ignoring empirical evidence of the senses or the logical argument of the mind.

Chesterton knew whereof he spoke, having himself gone through the same process during his religious rumspringa.  In “the earlier pages” of what his biographer Maisie Ward termed “The Notebook” from the 1890s he recorded thoughts that appear to have been influenced by New Age concepts.  The suspicion intrudes that “The Notebook” may be in the group of writings about which, according to Father John Hardon, Chesterton gave an “absolute command” that they never be published, possibly to avoid giving his followers (many of which in Chesterton’s lifetime already seemed to be going off on tangents) the wrong idea.  As Ward said,

[H]e dreams that ‘to this age it is given to write the great new song, and to compile the new Bible, and to found the new Church, and preach the new Religion.’  And in one rather obscure passage he seems to hint at the thought that Christ might come again to shape this new religion.  (Maisie Ward, Gilbert Keith Chesterton.  New York: Sheed and Ward, 1943, 67-68.)

That was the issue in broad terms for Chesterton the Catholic and humanist.  For Chesterton the distributist, St. Francis’s rejection of private property for himself was the most graphic and specific illustration possible of the importance of the institution of private property for every child, woman, and man.  Not “humanity.”  As Chesterton noted, “St. Francis did not love humanity but men.”  St. Francis was the quintessential personalist; the abstraction of the collective was meaningless to him.

That was why St. Francis’s rejection of personal private property could only be personal and private.  He seemed incapable of thinking in generalities, and in so doing approached the particularity of God far more closely than any collectivist ever could.  St. Francis could not, as some of his misguided followers did, reject the idea of private property.  That would have been impossible for him, for that would have meant that he, Francis, was making decisions for others and binding them against their will.

Yet that is precisely what some of St. Francis’s followers of then and now did.  Taking the essence of distributism, personal private property secured to individuals, as the touchstone and exemplar of the key issue (in broad terms the shift from the Intellect to the Will as the basis of the natural law written in the hearts of all people), they sought to abolish not only private property for themselves as a personal choice, but to abolish property itself entirely for all human beings — no wonder they were compared to barking dogs out to savage Christendom.  As Chesterton related,

Nobody so far as I know ever proposed to interfere with the vow of the individual friar that he would have no individual possessions.  Nobody, that is, proposed to interfere with his negation of private property.  But some Franciscans, invoking the authority of Francis on their side, went further than this and further I think than anybody else has ever gone.  They proposed to abolish not only private property but property. . . . Everybody knew of course that Franciscans were communists; but this was not so much being a communist as being an anarchist.  (Chesterton, St. Francis of Assissi, op. cit., 148-149.)

And yet the private property question, although key, was only the most obvious example of what the renegade followers of St. Francis worked to accomplish.  As Chesterton summarized the greater issue,

At the back of this particular practical question there was something much larger and more momentous, the stir and wind of which we can feel as we read the controversy.  We might go so far as to put the ultimate truth thus.  St. Francis was so great and original a man that he had something in him of what makes the founder of a religion.  Many of his followers were more or less ready, in their hearts, to treat him as the founder of a religion.  They were willing to let the Franciscan spirit escape from Christendom as the Christian spirit had escaped from Israel.  Francis, the fire that ran through the roads of Italy, was to be the beginning of a conflagration in which the old Christian civilization was to be consumed.  That was the point the Pope had to settle; whether Christendom should absorb Francis or Francis Christendom.  And he decided rightly, apart from the duties of his place; for the Church could include all that was good in the Franciscans and the Franciscans could not include all that was good in the Church.  (Chesterton, St. Francis of Assisi, op. cit., 150-151.) 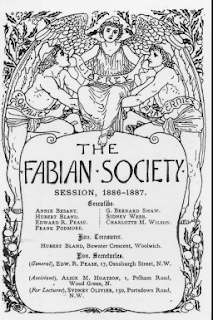 In light of such strong statements, expressed with such force and clarity, it seems incredible that anyone, much less a follower of Chesterton, could fall into the trap of Fabian socialism.  In a contradiction of colossal proportions, however, that is precisely what people proceeded to do.  Seemingly ignoring the first and last chapters in Chesterton’s book that refuted the two flawed understandings of St. Francis, people took the flaws as the Franciscan gospel and turned what Chesterton rejected into an endorsement.

Specifically, trapped by the illusion of the slavery of past savings, neo-distributists claimed to restore property by destroying it through the redefinition of natural law.  Adding insult to injury, they cited Chesterton’s own words as their inspiration and authority without bothering to cite empirical evidence or make a logical argument.  They merely denigrated the character, thought, looks, personality, or anything else, of anyone who dared to disagree with them.

People, especially neo-distributists and neo-Chestertonians, simply stopped thinking.  Truth became negotiable, reason something to ridicule, argument an abomination.  As Chesterton later remarked, “[I]t is generally the man who is not ready to argue, who is ready to sneer.  That is why, in recent literature, there has been so little argument and so much sneering.”

Distributism descended into a morass of moral relativism and the swamp of Fabian socialism.  Nor was this something that could not be predicted.  As the solidarist political scientist and jurist Dr. Heinrich A. Rommen explained,

For Duns Scotus [who promoted the primacy of the Will over the Intellect] morality depends on the will of God.  A thing is good not because it corresponds to the nature of God or, analogically, to the nature of man, but because God so wills.  Hence the lex naturalis could be other than it is even materially or as to content, because it has no intrinsic connection with God’s essence, which is self-conscious in His intellect.  For Scotus, therefore, the laws of the second table of the Decalogue were no longer unalterable. . . . an evolution set in which, in the doctrine of William of Occam [a leader of the Fraticelli] (d. cir. 1349) on the natural moral law, would lead to pure moral positivism, indeed to nihilism.  (Heinrich Rommen, The Natural Law.  Indianapolis, Indiana: Liberty Fund, Inc., 1998, 51-52.)

The problem for Chesterton was how to get distributism — and the distributists — back on the right track.