Three Key Books on Common Sense, IV: Chesterton Versus the Slavery of Past Savings

Yesterday we opened with our take on the 1928 debate between G.K. Chesterton and G.B. Shaw on whether there was any fundamental agreement between the two systems each one espoused, distributism and Fabian socialism, respectively.  Despite some snarky yet humorous comments by immoderate moderator Hilaire Belloc on the failure of the disputants to address anything substantive in the discussion, Chesterton and Shaw not only failed to address what Belloc regarded as the real issue — how to save civilization in a manner befitting the demands of human dignity — they couldn’t agree on whether or not they could agree.


We closed our brief analysis of the issue Belloc raised by noting that, because distributism could neither move forward nor stay where it was, it began moving backwards.  What do we mean by that?

As we noted, distributism as conceived by Chesterton and Belloc embodies three flaws.  Ironically, none of the flaws is inherent to distributism, yet today’s neo-distributists have taken them as virtual Holy Writ and pretty much mandated by God.

For example, the preference for small, family owned farms and businesses was, as Chesterton clearly explained, a preference only.  When businesses must be large (and he admitted, while having a personal emotional prejudice in favor of smallness, that economies of scale are often necessary), the workers (and, we would add, all “stakeholders”) should own equity shares in the companies. 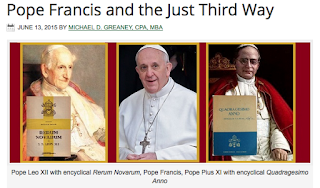 Obviously both of these flaws in distributism as originally conceived are easily correctible.  It’s the third one that has caused the problems: the slavery of past savings.  By “slavery of past savings” we mean the fixed assumption that the only way to finance new capital formation is to produce more than is consumed, accumulate (“save”) the excess in the form of “money,” and only then finance new capital.

What’s wrong with that?  Well . . . everything.  Given the fundamental principle of economics that “Consumption is the sole end and purpose of all production” (Adam Smith, The Wealth of Nations, III.viii), production that is “saved” instead of consumed is being diverted from its proper use.  Worse, goods that are produced specifically to be “saved” (i.e., not consumed) — as Keynes recommends in his General Theory (III.vi) are, to some degree, the economic moral equivalent of artificial contraception.

Yes, it is important for people to engage in productive work.  Work is noble, fulfilling, and a key aspect of human dignity.  Work, however, need not be understood exclusively as economic work.  The Aristotelian concept of “leisure work,” the work of civilization, is fully as legitimate as economic work — more so, in fact, if the economic work involves labor merely to gain income by producing unnecessary or harmful goods and services.  Economic work performed for any other purpose than to produce goods and services for legitimate consumption is an offense against human dignity.

The problem is that, if past savings — the excess of production over consumption — are the sole source of financing for new capital, then the oxymoron of necessary-unnecessary, degrading work solely for the purpose of distributing income is built into the system.  As we’ve seen in many postings on this blog, however, past savings are not the sole, nor even the best source of financing for new capital formation.  Past savings are best used to finance consumption of existing inventories.

Future savings — the present value of future increases in production embodied in a negotiable contract (what Louis Kelso called "pure credit" because it doesn't require past savings) — are the best source of financing for new capital formation.  We won’t get into that here, however.  We’ll simply refer you to two key works that explain the concept of pure credit so we can get to the point of this posting.  The first is Dr. Harold G. Moulton’s The Formation of Capital (1935).  The second is Louis Kelso and Mortimer Adler’s The New Capitalists (1961).  And don’t attach any particular significance to the use of the term “capitalist.”  What Kelso and Adler described wasn’t capitalism.

The point here is that if you assume as a given that only past savings can be used to finance new capital formation, distributism as envisioned by Chesterton and Belloc is impossible.  Past savings locks an economy into capitalism, socialism, or the unjust “third way” of the Welfare or Servile State.

Reliance on past savings means that you end up with one of two alternatives, both seemingly mutually exclusive, but both actually merely different aspects of the same thing.  The first alternative is a relatively small class of capitalists who have the ability to save the enormous amounts today’s advanced capital instruments require.  This is capitalism.

The second alternative is a State with the power to redistribute wealth by redefining basic terms such as private property, money, credit, banking, finance, and anything else that gets in the way of increasing State power and control, such as life and liberty.  Typically, the State redistributes directly through the tax system, indirectly by manipulating the currency, or both.  This is socialism.

Ironically, the blend of capitalism and socialism found in the Welfare or Servile State is not actually a third way at all.  It is, rather, an uneasy compromise between a private sector financial élite and a public sector bureaucratic élite that ends up with one of them taking over the other.  That is why Pope St. John Paul II cautioned against a “third way” between capitalism and socialism, and why we stress that CESJ’s Just Third Way is above and beyond capitalism and socialism, made possible by accessing future savings through pure credit.

As a result of this slavery of past savings, many people who considered themselves distributists followed Chesterton and Belloc in rejecting capitalism.   That was good.

They then made the fatal error of attempting to circumvent the shackles of the slavery of past savings by turning distributism into just another variety of socialism by redefining basic terms and principles — the very thing that Chesterton and Belloc refused to do, and which seemed to lock distributism into inaction.  Tomorrow’s posting will cover how this was done.