What on earth are you supposed to report on when the world ends, i.e., the stock market is closed, and won’t reopen until Monday?  And that is after the vote in Greece.  Still, there are a few items that appear to be noteworthy: 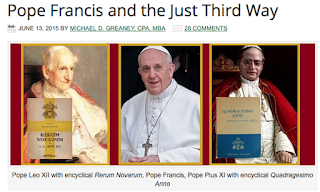 • The CESJ article that appeared three weeks ago in Homiletic and Pastoral Review, “Pope Francis and the Just Third Way”, has been getting a lot of circulation.  According to reports, the link has been sent to all members of the Catholic hierarchy (Catholic-talk for “bishops”) in Australia, and an attorney in Buenos Aires has been approached about either doing or supervising a translation into Spanish for circulation among the faculty and administration at the Pontifical Catholic University of Buenos Aires, and possibly publication in a journal.  One CESJ member has even sent a copy to the Vatican — which raises an interesting question.  Suppose you were sending a copy to Pope Francis personally instead of to, say, John Cardinal Smith or Msgr. Jack Jones . . . what do you put on the customs declaration for “last name”?

• Regardless where you stand on the same sex marriage issue, Peggy Noonan’s piece in today’s Wall Street Journal makes an interesting observation and raises an even more interesting question: why isn’t it mandatory that decisions on such visceral and fundamental issues be unanimous?  A split decision virtually guarantees that the decision on an important issue will be divisive.  In the notorious Dred Scott case of 1857 (Scott v. Sandford, 60 U.S. 393), for example, the decision was split three ways: six for, one concurrence (Justice Samuel Nelson agreed with the ruling but not the reasoning), and two dissenting, reported in the history books as a 7-2 decision.  In the Slaughterhouse Cases of 1873 (83 U.S. 36), which nullified the 14th Amendment and overturned the overturning of Scott v. Sandford, the decision was 5-4.  In Roe v. Wade (410 U.S. 113) there was again a three-way split: four for, three concurrences, and two dissenting.  Noonan argues that a unanimous decision would prevent the necessary alienation, even oppression, of those who dissent.  The Continental Congress in 1776 agreed, for example, that any decision in favor of independence had to be unanimous, for otherwise they would be setting brother against brother.  Of course, us non-lawyers wonder how a “concurrence” can be counted as a yea, when the issue is justice: either something is, or is not, just.  You shouldn’t be able to say yea because it gets you what you want, regardless of the argument.  That’s just a way of saying “might makes right.”  Or should that be “raw judicial power”?

• The debt crisis in Puerto Rico, while not quite on the same scale as that in Greece, shares some common elements, which conservatives have been quick to latch onto.  There are, however, some significant differences, which they ignore.  For one, Puerto Rico could never monetize its debt.  It either had to borrow existing funds, or get federal money created for that purpose out of federal, not Puerto Rican debt.  Puerto Rico is therefore obligated to private creditors and the federal government, and its sovereignty is not an issue since it is not an independent country.  Puerto Rico doesn’t have to worry about being sold down the river and being taken over by foreign interests.  For another, Puerto Rico comes under U.S. law — and mechanisms exist already to bring the island back to productivity, which is the only real way to get out of debt.  The S-Corp ESOP suggests itself, as does the plan proposed decades ago by Louis Kelso under Governor Luis A. Ferré, but which was depth charged by Nobel Laureate Paul Samuelson in what can only be described as petulant and incoherent testimony before Congress (but he did have a Nobel Prize).

• As of this morning, we have had visitors from 59 different countries and 44 states and provinces in the United States and Canada to this blog over the past two months. Most visitors are from the United States, Canada, the United Kingdom, Kenya, and Australia. The most popular postings this past week were “Halloween Horror Special XIII: Mean Green Mother from Outer Space,” “News from the Network, Vol. 8, No. 26,” “Thomas Hobbes on Private Property,” “Yet More on Property, II: Hudock’s Alleged Errors,” and “Avoiding Monetary Meltdown, II: Salmon P. Chase and the Greenbacks.”