The late Justin Wilson once related the story of a Catholic boy and a Protestant boy who were best friends.  One week the Protestant boy went to mass with the Catholic boy.  Through the service, the Protestant boy would ask, “What’s that mean?” and the Catholic boy would explain, “That’s th’ ‘introit’ th’ comin’-in song.  It means we’re all welcome.  That’s th’ ‘First Readin’ from th’ Old Testament, th’ ‘Second Readin’ from th’ New Testament, an’ the Gospel Readin’.  That means we believe th’ whole Bible ties together for all Christians.  That’s th’ ‘Eucharist.’  It means we believe it’s th’ actual Body and Blood o’ Christ under th’ ’pearances of bread an’ wine.”  And so on.


The next week the Catholic boy went to service with the Protestant boy.  Naturally the Catholic boy asked what things meant.  The Protestant boy started explaining, or ’splainin’, depending on how far South you’re getting.  “What’s that mean?” “That’s our entrance hymn, our comin’-in song, it means we’re all welcome, too.”  “What’s that mean?” “That’s our Bible readin’, the Scripture passage we’re gonna reflect on.” 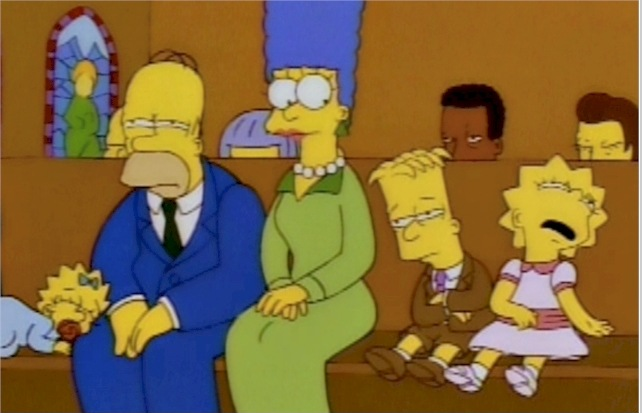 Then the preacher took out a big pocket watch and laid it on the pulpit next to the Bible he had just read from.  “What’s that mean?” asked the Catholic boy.  The Protestant boy said, “That don’t mean a damn’ thing.”

Are you keeping a close eye on the stock market?  Don’t bother.  Like the preacher’s timepiece, it don’t mean a damn’ thing.  The stock market produces no marketable goods or services.  If you want to find out about the primary market, the productive sector, just look and see how well you and your neighbors are doing — and ask yourself how much better you could be doing under Capital Homesteading.

That’s why you might want to support the “Five for the Family” campaign, and — more important — spread it around your networks.  The more people know about it, the more likely we are to catch the attention of gatekeepers and prime movers to champion the idea of Capital Homesteading for every child, woman, and man.

• Speaking of the “Five for the Family” campaign, it’s off to a pretty good start.  We have already started receiving contributions on the crowdfunding webpage, and the FaceBook page has received nearly 50 “likes” and over 500 “reaches” in less than a week — this is pretty good, starting from zero for a campaign that is somewhat different from the vast multitude of extremely worthy causes (and the way the number 5 keeps appearing is pretty cool).  Be sure to “like” and “share” the campaign on FaceBook, and consider making a donation yourself, but more important, spread word of the campaign around your network.  The more people know about this, the better — and the sooner we’ll reach our goal.

• You may have heard about the “Flash Crash” caused by a hacker (“that’s THE Hacker, to you” — insider Christopher Lloyd joke) who manipulated the market with false trades and parallel transactions and who knows what-all . . . who is now out on something like £5 million bail.  Don’t worry, he can cover it.  He made much more than that with his shenanigans.  It won’t be party time, however.  The hearing for his extradition to the United States is coming up, and in the meantime he and his parents had to surrender their passports, he’s not allowed anywhere near a computer, he can’t go out after dark, and a few other restrictions due to his being something of a “flight risk.”  Just another instance of the secondary stock market being mistaken for the primary productive sector — which Capital Homesteading might not eliminate, but it would render it pretty much meaningless in economic terms and in the lives of ordinary people.

• The C.I.A. (not “Certified Internal Auditor”) claims that triggers are now in place for a crash that will cause a depression lasting at least 25 years.  We’ve been saying the same thing all along.  There is hope, however.  The indemnity Prussia imposed on France following the Franco-Prussian War was intended to destroy France economically forever as a potential rival to the Second Reich.  It was paid off in 2½ years.  How?  By France becoming hyperproductive in goods that were in exceptionally high demand in the global market, by having its productive capacity broadly owned by families instead of large trusts and monopolies, and by Bismarck not understanding money and letting the French pay in silver Five Francs at a time when the price of silver was falling through the cellar.  The German hyperinflation following World War I?  It looked like economic Armageddon.  Within ten years, however, Germany had become strong enough to almost conquer the world.  How?  By implementing an asset-backed reserve currency and aggressively promoting production.  Capital Homesteading could do the same for the United States — and without having to wait for the system to collapse to do it, either.

• According to a recent report (yes, we know, these things are funded to have anticipated results, but in this case it’s probably correct), most Americans are, to all intents and purposes, delusional about when they will be financially able to retire, as in at least a decade or more off.  Frankly, we need to rethink the whole retirement schtick, anyway, and shift from “saving for retirement” to “investing for life” under Capital Homesteading.

• Follow this link and see if you can answer the three simple financial questions that students were asked recently . . . and that most of them got wrong.  Then ponder why so many people can’t understand the simplicity of the Just Third Way.  Something like this might alleviate some of that wonder.  The fact is that economics and finance is made so complicated by bad assumptions about money, credit, banking, and finance that people can’t understand even easy questions like these.

• Paul Voelker, former Chairman of the Federal Reserve, thinks that inflation might not be all that it’s cracked up to be, and that maybe we shouldn’t be worried about the lack of it.  We agree with his conclusion, but some of his reasoning might be a little off.  See what you think.

• Nobel Laureate Stiglitz solves all our problems.  He claims the “American Dream” is a myth, blaming it on inequality, for which he has the solution: 1) Tax reform to soak the rich to fund more redistribution by government, 2) reform of corporate governance and anti-trust laws to allow more government control, and 3) equal access to education in government schools.  The problem is that all of these things are either symptoms or stopgaps.  Yes, we need tax reform to ensure that everyone pays his or her fair share — but we also have to be sure we define “fair” fairly.  It’s not right that the rich pay less proportionately . . . but it’s also not right that they pay more simply because they’re rich.  Everyone should pay the same rate above a meaningful exemption to cover ordinary and reasonable living expenses.  Yes, we need to reform corporate governance and anti-trust laws . . . but that is only meaningful if and only if more people are owners, which Stiglitz does not address.  Yes, we need equal access to education, but education in and of itself does nothing to decrease the wealth and income gap.  Making it possible for everyone to become productive through both labor and capital would do much more than simply imposing desired results the way Stiglitz demands.

• As of this morning, we have had visitors from 66 different countries and 53 states and provinces in the United States and Canada to this blog over the past two months. Most visitors are from the United States, Canada, Kenya, Poland, and Australia. The most popular postings this past week were “The Purpose of Production,” “Thomas Hobbes on Private Property,” “Aristotle on Private Property,” “Halloween Horror Special XIII: Mean Green Mother from Outer Space,” and “You Asked, Kelso Answered.”