The fun never stops around the Just Third Way.  One of the funnest things (our grammar is as good as Keynesian Modern Monetary Theory, “MMT”) is the absolute refusal of many commentators to realize that the Just Third Way, being based on the binary economics of Louis Kelso and Mortimer Adler, is not your usual past-savings based system.  It’s a past- and future-savings-based system.

Two caveats right off the bat.  1) Inventories are not, strictly speaking, “past savings.”  They are stock in trade, produced or acquired for sale or resale in order to realize a profit.  2) Government debt created by monetizing deficits (“bills of credit”) are also not “past savings,” although that is how they are construed in virtually all mainstream monetary theory.  Bills of credit are backed by the present value of anticipated future tax collections . . . that may never actually materialize if the tax base has eroded or the government lost power.

The problem is that mainstream monetary theory treats both private sector inventories and government bills of credit as if they were past savings, and ignores bills of exchange based on future savings.  This accounts for the emphasis in modern economic theory on interest rates — which, strictly speaking, are only valid when dealing with past savings.  Since the vast bulk of today’s money supply (and thus existing accumulations of savings) is backed by distorted and ephemeral future savings in the form of bills of credit, trying to achieve a sound and just financial system by applying the wrong principles has, in part, created the horrifying mess we see in the world today. . .  ironically due in large measure to the National Bank system instituted in 1863 by Treasury Secretary Salmon P. Chase on bad — very bad — banking principles.

Now to a possible solution.  A while back, possibly the early 1970s, Dr. Norman G. Kurland, president of the Center for Economic and Social Justice, came up with a proposal: the two-tier interest rate.  (Since “interest rate” was something of a misnomer, it’s been switched to “credit system,” but the substance has remained the same, and you’ll still see the original term in older writings and when there’s a slip of the tongue.)

The Two-Tiered Credit System. To shift the economy toward faster growth rates and broader participation in capital ownership, the floor price on the cost of money would be determined by (1) the nature of the assets behind the money, (2) the impact of the money on ownership diffusion or concentration, and (3) the money’s source (i.e., “pure credit” or “past savings).

Tier One: New Money (“Pure Credit” or “Future Savings”). Credit and “new money” for Capital Homesteading, i.e., feasible business projects linked to broadened ownership, would be generated “interest-free” through the rediscount mechanism of the central bank, at a service charge based on the cost to the central bank of creating new money and regulating the lending institutions (possibly 0.5% or less).

The newly developed “pure credit reservoir” would gradually supplant conventional sources of the economy’s expansion capital, becoming the main source for financing the trillions of new equity issuances representing the growth capital required by the economy in the coming decade. The replacement of existing capacity (i.e., plant, equipment and infrastructure) would continue to be financed in the usual way, with profits generated by existing assets, so that the financing of growth would not deprive present owners of any property rights in their existing assets.

As explained above, pure credit is based wholly on promises secured by the future profits anticipated from the new capital investments, i.e., "feasibility." Because pure credit would be limited to self-liquidating capital formation and would be cut off automatically by the Federal Reserve whenever the economy operated at 100% of its capacity as a result of lack of qualified paper to rediscount, “pure credit” is not inflationary. In fact, because low-cost capital credit is geared to increasing production levels without artificially raising labor costs and entitlements, it should bring about lowered overall costs, and thus be counter-inflationary. “Pure credit” should never be permitted for consumer financing, government deficits or for speculating in previously issued securities or derivatives on the open market. These would be financed through the “past savings reservoir.” 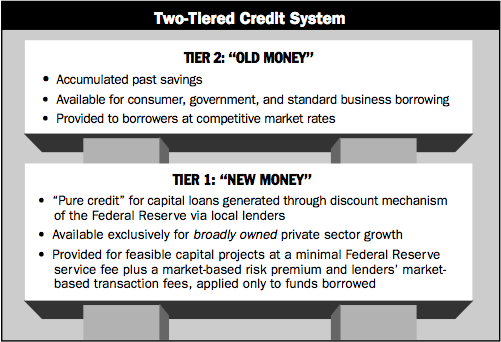 Tier Two: Old Money (“Other People’s Money” or “Past Savings”). Credit and money for nonproductive, ownership-concentrating uses would come from past savings (“old money”). Yields on already existing investments (“past savings”) should be permitted to rise to whatever levels the money market will permit. Interest rates on “Tier Two” would, therefore, level off at yields on alternative investment opportunities.


Existing savings (to the extent present owners do not convert them into funds for their own consumption) would be freed up and channeled into reserves for capital credit insurers and reinsurers. This would provide an expanded funding pool for consumer loans, housing loans not financed through Homeowners Equity Corporations, highly speculative ventures, loans for speculating in securities on the open market, small business loans, Treasury bonds, and other risky or inflation-prone purposes.  We wouldn't ruin Mister Scrooge, just take away his monopoly.

“Old money” would also be available for building museums and monuments, or for funding charity, education, and other noble worthy causes. Since this separate reservoir would not increase the output of marketable goods and services to any appreciable degree, its interest rate might contain an “inflation premium” to offset inflationary pressures arising from the use of these funds for stimulating consumer demand or for wasteful and speculative purposes.

An added benefit from shifting from past savings to future savings for new capital formation would be to free enormous resources to help the poor without harming the private sector’s ability to finance new capital formation and create jobs. Given the focus of many religious leaders (such as Pope Francis) on the need to increase aid to the poor, Capital Homesteading has the potential to vastly increase resources available for that purpose and, at the same time, decrease the need for such assistance.