We were going to head this posting, “The Boil Weevil” instead of “The (B)oil (We)evil” to suggest the “evil” of oil, but some people might think we had just made a stupid spelling error and move on without reading the posting.  That would be a pity, because it’s a great play on words and highlights a serious problem.


First, a little background.  In 1892, the boll weevil, a bug that lives off of cotton blossoms and buds — the part of the plant that develops into the cotton boll from which the fiber comes — hit the United States, as the song says, “Come from Mexico, they say, uh, huh, come all the way to Texas.”  The song might be a catchy little number, but there was nothing entertaining about the boll weevil.  It devastated the cotton crop just in time for the Panic of 1893 and the Great Depression of 1893-1898.

The Civil War and the Homestead Act had already ensured that King Cotton would not rule the American West, but he still held most of the South in an iron grip.  The one-crop economy kept most of the people, black or white, poor.  Slavery might be legally abolished, but tenant farming and sharecropping kept the lower classes in their place.

The boll weevil changed that.  It forced diversification into other crops, notably wheat and peanuts (the latter thanks to the pioneering efforts of the great scientist George Washington Carver, cir. 1860-1943).  This contributed to the bumper crops of wheat the U.S. experienced in 1897-1898 . . . just in time for the crop failures in Europe, with the increase in exports bringing the Great Depression of 1893-1898 to an end . . . until the next time.

Now for the point.  The recent sharp drop in oil prices has been causing something of a panic as shareholders see the value of their holdings plunging.  Of course, something like this should not worry the true investor, who owns shares for the dividend income, but that type of shareholder has become a rara avis these days, when there is nothing behind the swings in the stock market besides panic and government debt-backed funny money.

Oil, then, might be considered the boll weevil of the twenty-first century.  Most oil-producing nations are “one-crop economies,” i.e., they live on oil almost exclusively — which is either owned by the State, or by a few people who own the State.  Most of the people do not own any part of the oil.  Whether oil revenues benefit everyone or the elite depends totally on whether the ruling elite decides to cut them in on the goodies.

Obviously the ordinary person in the U.S. is benefiting a little — for now.  As a financial analyst friend pointed out, however, the drop in oil prices and the subsequent “plunge” in the stock market means that inflation will drop, interest rates will stay low, and there will be little or no investment in new capital . . . and no “job creation.”

The dubious benefits of Keynesian economics. . . .

The rational thing for both the oil producers and the oil consumers to do at this point is to diversify.  The oil producers need to get into other “crops.”  Oil alone is not only limited in amount, it is a non-renewable energy source.  It’s just plain stupid to think that you can count on oil revenues forever to keep an economy going.  A “boll weevil” is almost guaranteed to come along and undermine the crop’s revenue potential.  If the cost of production exceeds the market price, just how much money is going to come in?

If the potential for disaster for the oil producers is significant, it is dwarfed by that facing the oil consumers.  The Great Famine in Ireland from 1846 to 1852 wasn’t caused by lack of food.  It was caused by failure of the subsistence crop, potatoes, and the refusal of the authorities, brainwashed by bad economic theories, to stop food exports.

The irony is that, just as there was plenty of food grown in Ireland in the 1840s and 1850s, it was shipped out of the country to support the lifestyles of absentee landlords.  The Irish didn’t own the landed capital used to grow the food, so they didn’t own the food.

Similarly, there is plenty of energy around, and it’s renewable, at least, for all practical purposes.  Take hydrogen, for example, the fuel the sun runs on.  It’s the most common element in the universe.  The problem is that at present there is no cost efficient way to tap it, and ordinary people don’t own the technology.

Suggested solution?  Use the “savings” from the drop in the price of oil to finance a Manhattan Project for clean hydrogen fuel.  We’re not talking fusion or fission here, but just burning hydrogen.  It’s more volatile than gasoline, which means more energy, and with proper safety precautions, is safer.

For example, rupture a gasoline tank in a car wreck, and the gasoline spreads out, just waiting for a spark to ignite it, if the collision didn’t already do it, and incinerate anybody in the vicinity.  Rupture a hydrogen tank, and the fuel gasifies (if it’s in liquid form), and instantly shoots straight up in the air, dissipating safely.  If it ignites, the flames go straight up in one flash, rather than spreading out and burning for a while. 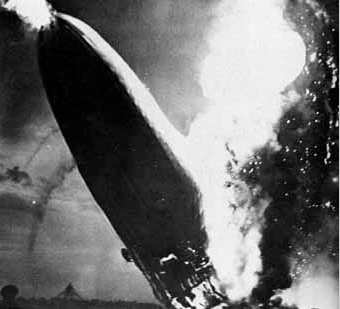 Some years ago on the old PBS show Nova, they fired an incendiary bullet into a tank of gasoline, and a tank of hydrogen fuel.  The gasoline tank exploded, spread out and just kept burning.  The hydrogen tank exploded, flashed once, and the fire was out.

Do you know how most of the people who died in the Hindenburg disaster died?  They jumped, and either died in the fall, or got hit with burning wreckage.  Most of the ones who rode it down and ran survived — the explosion, as the film reveals, went almost straight up.

Hydrogen is only one example of potentially cheap and plentiful energy.  There are many others — but if we wait until disaster strikes before we develop them, it may be too late.

And the boll weevil?  There’s a monument to the insect in Enterprise, Alabama.  Sometimes good things come in small — and deceptive — packages.