Yes, that’s “expedience,” not “expedients.”  We didn’t misspell.  The issue we’re looking at today is the question of when expedience is allowed, so that you may employ allowed expedients.  Yesterday we contrasted the clear evil of killing an innocent person for the presumably greater good, with the more ambiguous situation in which someone’s only recourse to death is to steal to stay alive.


As you might expect, there is a “Catch-22” in this “permission to steal.”  The needy individual may incur no moral guilt, but the social order is such a great good that certain bad things are permitted to maintain order, while certain good things are forbidden for the same reason.  Usury, for example — the taking of a profit when no profit has been generated — is a great evil.  Profit-taking is in and of itself, however, is a very great good, only becoming “evil” (despite the insistence of the socialists) when no profit has been made.

Modern corporate finance and (more especially) the consumer credit industry are, however, based firmly on the presumed need to take a profit whether or not profit has been made.  This extends even to the presumably “just” demands of workers for fixed wage and benefits packages sufficient to meet the needs of them and their dependents . . . whether or not they produce goods and services of equivalent value to the wages and benefits they receive.

Thus, even though it is a great evil, usury — a form of theft, and thus a violation of private property — must be allowed to continue, at least in the present condition of society, even though the usurer incurs grave moral guilt when he has another viable choice.  This is because simply abolishing usury in all its forms unilaterally and without changing the basic structures of the modern financial system would destroy civilization.  Yes, it would.  Don’t kid yourself. 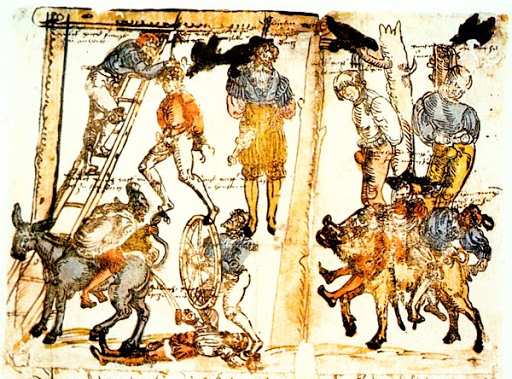 Paradoxically, stealing from the superabundance of another — for which the taker does not incur moral guilt — must not be allowed!  That is because if simply taking what one needed from another became the accepted and ordinary way of obtaining the necessities of life, society would collapse.  That’s also why Leo XIII taught that in extreme cases the State may make a redistribution: allowing people simply to take what they need would irreparably harm the common good.  (Rerum Novarum, § 22.)

Private property is one of the pillars of the social order, along with life and liberty.  If anyone could take what he wanted from the goods of another, the productive would be punished by not being allowed to profit by their industry, while the lazy and shiftless would be rewarded.  People would soon only produce at the point of a gun, as became obvious in the former Soviet Union.  Does this mean that there is no recourse, that mankind is locked into unjust social structures for all eternity?

Of course not.  As Pius XI made clear throughout his pontificate, each human person has the power (meaning the right) and the duty to organize with others when the institutions of the social order are flawed to an intolerable degree.  We do not simply abolish an evil and prevent it with the coercive power of the State.  On the contrary, we first convince others that a more rationally structured social order is desirable, then work to bring it about. The unjust institution — such as usury or widespread poverty — is either reformed or falls of its own dead weight, replaced by a better institution.  (Vide Rev. William J. Ferrree, S.M., Ph.D., The Act of Social Justice. Washington, DC: The Catholic University of America Press, 1942.)

Many people, however, find this “act of social justice” — organizing for the common good in order to effect beneficial change in our institutions — too slow or presume it to be ineffective.  They demand that the State take charge of as much as possible in order to implement instant social change — enforced, as we might expect, at the point of a gun: the police power of the State.  This ultimately results in the deification of the State, and inevitably a joining of Church and State in some fashion, whether through the establishment of an official State church (and thus under the control of State bureaucrats, and manipulated for political purposes) or the elimination of competing faiths, leaving the State the only “religious” body.

This, then, was the whole issue between Archbishop Thomas and King Henry — you knew we’d get around to it eventually.  In the Middle Ages the Catholic Church had “from time immemorial” certain rights and privileges on which the civil power — the State — could not encroach.  Often, of course, the State had interfered in these matters, with consequent repercussions, both serious and, in some instances, almost ludicrous.  There were also not a few worldly ecclesiastics who sought to curry favor with the civil authorities by asserting that the princes of this world ruled by “divine right,” thereby muddying the waters even more.

For example, the whole Guelph and Ghibbeline struggle in Italy and Germany, which spilled over on occasion into France and England, was a struggle between civil authorities who wanted to take over the Church and use it for their own ends, and ecclesiastical authorities who wanted to use the spiritual power of the Church to set things right in the civil sphere, backed by the coercive power of the State.  Once that struggle was decided, the Guelphs and Ghibbelines (and their spiritual descendants) continued fighting amongst themselves to decide how Church and State were to relate to each other once the separation was effected.