Last Thursday we took a look at the biggest problem any contender for the White House in 2016 faces: no vision and no specific proposal except some form of jobs and welfare, or an arrangement where some benefit at the expense of others.  Frankly, we think Santorum can do better than that.  Heck, we think Obama can do better than that.  All it takes is an open mind and a willingness to listen to something genuinely new instead of rehashing the Same Old Thing.


Thus, whatever his good intentions, if Santorum is operating within the current flawed paradigm that some people only benefit at the expense of others, he’s not sending the right message — or, perhaps more fairly, isn’t being heard.  If “the rich” hear him, what filters into their brainpans is “I’m going to take from the deserving rich and give to the undeserving poor.”  What “the poor” hear is similar:  “I’m going to take from the undeserving rich and give to the deserving poor.”

Again, that might not be what Santorum will say.  It’s what people will hear.

Fortunately, there’s a way out, or we wouldn’t have brought this up.  There’s a way that everyone can have an equal opportunity to participate in economic growth without taking anything from anyone, not even the bloated rich or the slack-off poor.

If you’re a regular reader of this blog, you know exactly where this is going: Capital Homesteading.  A Capital Homestead Act would give every child, woman, and man equal opportunity and access to the means to participate in economic growth as a capital owner, not merely a wage-worker or welfare recipient.  It would expand Lincoln’s concept based on the limited land frontier to the virtually unlimited commercial and industrial frontier.

The key is in financing.  If we assume that the only way to finance new capital formation is to cut consumption and accumulate the surplus as money savings, we restrict ownership of all new capital formed to those who are already rich and can afford not to consume all of their income.

If, however, we take the present value of future increases in consumption and turn it into money to finance new capital, then repay and cancel the new money out of the profits generated by the new capital when it becomes profitable, the problem solves itself.  Instead of financing economic growth out of what has not been consumed in the past, we can finance growth out of what can be produced in the future — and it won’t be either inflationary or deflationary.

All we have to do is make sure that all new capital is financed in ways that create new capital owners, and the frantic search for new ways to finance artificial “job creation” can end.  People will be too busy producing things for which there is a genuine demand to worry about doing make-work just to get an income.

Given all the pent-up demand just in the United States, if income, both labor and capital, were spent on consumption, there would be a tremendous amount of real job creation because employers would desperately need workers.  Our rough estimate is that the economy would reach full employment within 18 to 24 months — which is about what it took during World War II, when full employment was reached in 1943/44.

And the debt?  If we limit it to the “official” booked debt, a very conservative estimate is that the $18 trillion or so could be entirely paid down within 60 years without austerity or imposing higher taxes.  That’s conservative.  Given an all-out effort (which would require a massive increase in exports and decrease in imports to make up for the decrease in demand domestically resulting from higher taxes), the debt could conceivably be repaid within twenty-five years.  (We don’t recommend that, but it is conceivable.) 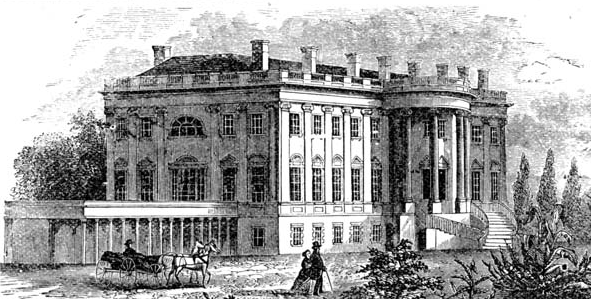 If Santorum wants to walk into the White House in 2016, he might want to consider implementing a radical new idea as old as Lincoln.  And, while this is not a consideration for many people, what we’re talking about has received the personal encouragement of Pope St. John Paul II.  It’s fully consistent with Catholic (and Jewish and Islamic) social teaching.  We’ve got the pictures to prove it.