Happy Capital Day!, III: How to Make Everyone an Owner

Finishing off our Capital Day Trilogy, today we look at the 800-pound gorilla in the room: if capital ownership is so good, and the rights of private property are to “be held sacred and inviolable” (Rerum Novarum, § 46), how are people without capital supposed to get capital if they can’t get it from the people with capital?


That’s an excellent question.  The answer is to figure out some way in which people without capital ownership can become capital owners, but without taking anything away from current owners.  Believe it or not, that’s actually easier done than said!

Why do we say that?  Because once you’ve done the hard part and formulated the question, you should realize that the answer is ready to hand.

Think for a moment.  Right now many people assume that the only way to finance new capital formation is to consume less than is produced, accumulate the surplus in the form of money savings, then use the savings to purchase or build new capital.

If you look at the development curve (below) you’ll notice something . . . odd.  Since the end of the 17th century, the “curve” is practically straight up: 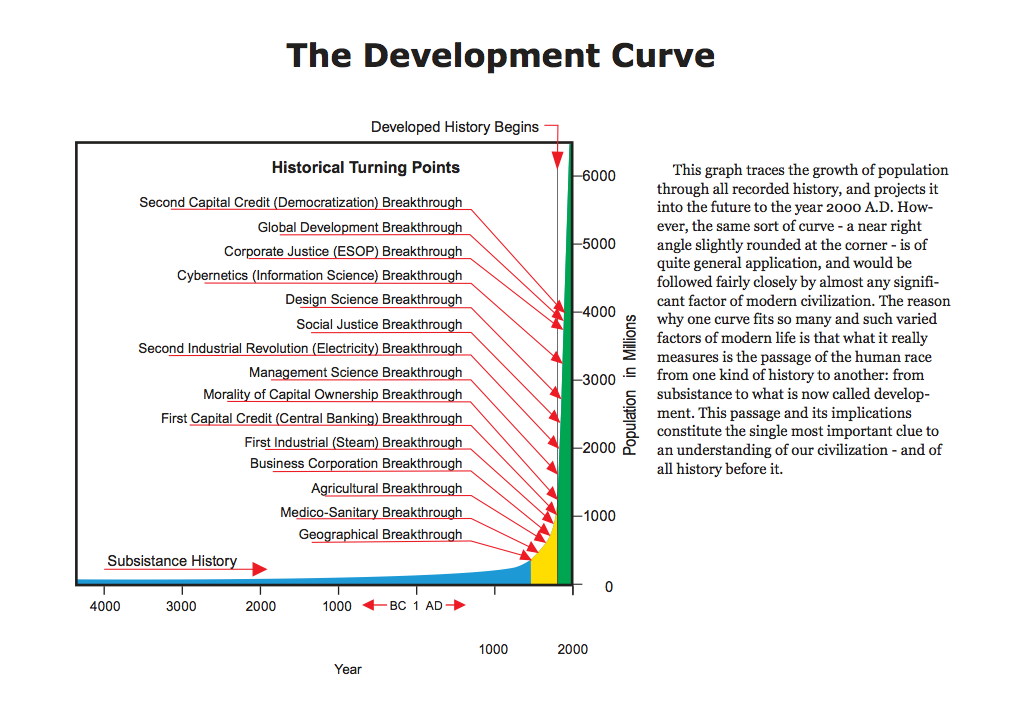 Think about that.  No, really think about it.  If the cost of new capital approximates the present value of the future stream of income of the new capital (which is almost always the case in a developed economy), then the growth or development curve should be a gradual percentage increase approximating the annual after-tax Return on Investment (ROI) for new capital.

In after-tax terms (we have to use after-tax ROI because a company cannot finance new capital with money it used to pay taxes, obviously), that means there should be a steady 9-12% maximum growth rate in terms of investable funds (past savings) since the Industrial Revolution.  That’s a pretty shallow curve; a 100% after-tax ROI would only be a 45 degree angle, after all.

Instead, we see an almost 90 degree angle!  That means that the actual growth rate in terms of investable funds (past savings) since the Industrial Revolution has been close to 200%!

In other words, the growth rate in terms of funds available for reinvestment (i.e., after tax income), and assuming no capital income at all is used for consumption purposes, is nearly twice the largest possible amount of funds available to finance new capital!

That is absolutely impossible . . . if we restrict the source of financing for new capital investment to past savings.

Obviously, then, financing for new capital investment must have come from somewhere other than past savings for the past three centuries or so.

If we believe Dr. Harold G. Moulton, the financing for new capital investment during periods of rapid capital expansion doesn’t come from past savings at all.  Instead, it comes from future savings: the present value of future increases in production instead of past decreases in consumption.  All of a sudden, economic growth need not be bound by what exists.  It need only be bound by what can exist. This is what commercial banking and central banking were designed to do.

Louis Kelso and Mortimer Adler realized that anyone who can enter into a contract can turn that contract, a promise, into money, use that money to finance new capital, and then fulfill the contract by increasing production of marketable goods and services.  Anyone with a financially feasible capital project, i.e., one that pays for itself out of future profits, can become a capital owner without taking anything from anyone else.

That is why Kelso and Adler subtitled their second book, The New Capitalists (1961), “A Proposal to Free Economic Growth from the Slavery of Savings.”  Savings are, of course, essential to finance new capital.  If we are limited to past savings, however, that which is, the savings keep us enslaved.  If we open up future savings, however, then we are limited only by what can be.

Thus, if it is possible to conceive of every worker — or anyone else — as a capital owner, and the only thing keeping you from it is how to pay for the capital, then it is merely necessary to shift to a system in which capital pays for itself out of its own earnings, and make certain everyone who wants to be an owner has the equal opportunity and access to the means.

That is what Kelso and Adler proposed in The Capitalist Manifesto (1958), and that CESJ has promoted with its Capital Homesteading concept.