As of this writing, the Dow is down more than a hundred points.  It was up over a hundred the other day, just after it was down over a hundred.  This is not a Good Thing for many reasons.  From a historical and psychological point of view, it desensitizes people to fluctuations in the market, increasing what psychologists call “the zone of indifference,” i.e., “Ho-hum.  It’s down a hundred, up a hundred . . . what’s on TV?”


Why is that bad?  The wild swings in the market in late Spring and early Summer of 1929 led many people to think that this was “normal” market activity when the stock market got into the rarified atmosphere when the Dow reached heights it never had before.  There was nothing to compare it with, so how did you know it was not normal at that price level? 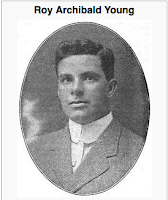 Consequently, when the stock market started to skyrocket in the Fall, nobody really got worried except a few diehard conservatives, like Roy Archibald Young, Chairman of the Federal Reserve, whose differences with others on the Federal Reserve Board were on how best to stop money creation for stock market speculation, not how to flood the country with debt-backed funny money as advised by John Maynard Keynes.

• Some relatively good news this week on the Burundi front.  The CESJ core group had a discussion with an immigration lawyer who was cautiously optimistic about Jean-Marie’s efforts to be granted political asylum in the United States.  By the way, if you would like to contribute to the legal costs, we haven’t started an official fund drive yet, but keep in mind that, one, lawyers don’t seem to work much for free any more (even on an initial consultation), and, two, CESJ is a 501(c)(3) organization, so contributions are tax deductible in the United States.  Some of what we hope to collect will go to CESJ for overhead and the direct expenses of assisting Jean-Marie, and if anything is collected in excess, it will probably be put toward the overall project for Burundi and Guinea that Jean-Marie was working on when events interfered.

• According to a report in the Washington Post this morning (“Digest: Burundi, Catholic Bishops Pull Support for Elections,” A8), another development in the Burundi situation is that the Catholic bishops of Burundi have withdrawn their support for the election next month.  The current president, Pierre Nkurunziza, is seeking a third term when the constitution limits him to two, and has been having people intimidated and killed to ensure his victory.  The Catholic Church had agreed to provide priests to monitor the elections.  The European Union is also suspending its election observer mission.

• Also in connection with the Burundi situation, Jean-Marie was interviewed this morning by Voice of America as an expert on the environmental impact of the Burundi refugees.  The interview was very well received, and they indicated they might want Jean-Marie back for other interviews.  If a recording of the broadcast becomes available, we will post a link.

• As of this morning, we have had visitors from 47 different countries and 45 states and provinces in the United States and Canada to this blog over the past two months. Most visitors are from the United States, the United Kingdom, Canada, Switzerland, and Australia. The most popular postings this past week were “Thomas Hobbes on Private Property,” “Halloween Horror Special XIII: Mean Green Mother from Outer Space,” “Knute Rockne and Social Justice,” “Religion v. Science? Or Faith AND Reason?” and “The Lost Speech of Peter S. Grosscup, V: Financing Widespread Ownership.”