This week has been very busy, but mostly because we’re preparing for upcoming events, notably the annual Rally, this year stressing “Own or Be Owned”: if you do not own capital, you soon become owned as capital — what they used to call “slavery” but now call “job security” and “welfare.”


One or two things have popped up on the radar, however, so here’s the list:

• Here’s something troubling for the American Dream, although it has certainly staved off the “empty nest syndrome” for many people . . . who now wish they could have such troubles.  “Thirty-Somethings” are still living at home in increasing numbers, as a recent news report reveals.  Dare we say it?  If these people had Capital Homestead Accounts, they would only live at home with their parents because they wanted to, not because they had to. 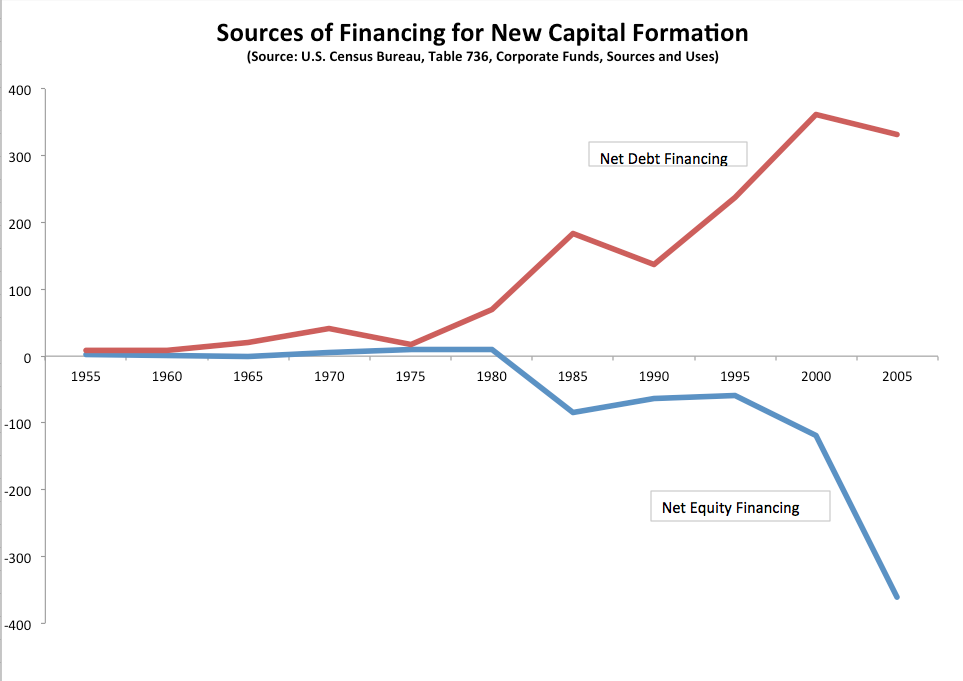 • Analyzing some U.S. Census Bureau data in light of some comments made during a discussion with a financial analyst in the U.K. earlier this week, we got a distinct sense of “déjà vu all over again,” as Yogi Berra would say.  That is, corporations are using debt financing in preference to equity financing — and this is not a recent development.  It has been going on at an accelerating rate for the past half-century . . . and was also noted by Judge Peter S. Grosscup in a series of articles in the early twentieth century.  Corporate ownership is being increasingly concentrated in fewer and fewer hands, as the chart, developed from Census Bureau data, clearly shows.  Note that debt financing of new capital formation is consistently above the zero base line.  That means debt financing is increasing as outstanding corporate debt increases.  Now note that equity financing is consistently below the zero base line.  That means that the amount of new equity issuances (“corporate ownership”) is more than offset by retiring of outstanding shares: net corporate ownership is decreasing; corporate wealth is held in fewer and fewer hands.

• Earlier this week Pope Francis made some comments that a large number of people are virtually guaranteed to misunderstand or misinterpret, viz., “I make a heartfelt appeal that the logic of profit may not prevail over that of solidarity and justice . . . . At the center of every issue, especially in relation to work, there must always be the human person and his or her dignity . . . . And the ability to have work is a question of justice, and it is an injustice not to have work . . . . being unable to bring bread to the table means losing one's dignity . . . . this is the crisis of our time, especially for the young who, without work, have no prospects for the future and may become easy prey to criminal organizations.”  Now, every word Pope Francis said is true — but here’s what people are going to get wrong.  They are going to assume that, 1) Work is the only way to gain income.  2) Economic work for income is the only legitimate form of work.  3) People who do not perform economic work and yet have adequate income are parasites, drones, and thieves.  Yet if you read carefully, Pope Francis said none of these things, nor did he imply them.  His “error” — if you even want to call it that — was to fail to mention that finding economic work for people is an individualistic measure, whether justice or charity.  It is not social justice . . . which involves restructuring our institutions so that everyone has the opportunity and access to the means to take care of him- or herself and any dependents through his or her own efforts, whether that be by economic work, capital ownership, or both.  Does that mean that people who have an adequate income from capital don’t have to work?  No.  Everyone needs to work. It is actually something of a degradation of work to link it exclusively to subsistence; it means that we never get to the real work of civilization and making ourselves more fully human.  Rich people who do nothing are, insofar as human dignity is concerned, in the same boat as poor people who do nothing, although they at least don't have to worry about eating — and it’s on their own heads if they avoid work. Neither fully develop as human beings.  Of course, if you want a system in which everyone who wants or needs economic work can find it without artificial job creation or redistribution, you need the Just Third Way . . . which is why we need to talk to Pope Francis.

• According to a Reuters report, U.S. economic growth has slowed and corporate profits have fallen.  Oddly, however, the stock market continues to soar, although there has been an increasing incidence of “mini-crashes” that have caused a little nervousness among more conservative gamblers, that is, investors.

• The manuscript for Prophet of Modernism has been submitted to a publisher.  We expect to hear something very soon, as we had previously discussed the project with the publisher, and he commented very favorably on an early draft of the book.  If you simply can’t wait for the book’s acceptance and release, however, there is nothing to stop you from reading other books with a Just Third Way orientation.

• The first step in the revision of CESJ’s “blueprint for change,” Capital Homesteading for Every Citizen (2004) has been completed, and the manuscript submitted to the CESJ core group for comments and editing.  While it does not appear that it will be out in time for CESJ’s 30th Anniversary Celebration next month, we may discuss the feasibility of allowing people to purchase advance copies in bulk at a discount, both to fund the revision, and to help generate a little “buzz” about a work that, while good before, has been much improved by updating and the increasingly obvious fact that it presents the only viable alternative to tried-and-failed solutions that only end by making matters worse.  If you still don’t have the original 2004 edition — useful for comparison and historical purposes — we expect that it will continue to be available until December 31, 2015.

• We are still ironing out logistical difficulties in our campaign for economic justice, but hope to have something up and running soon.

• As of this morning, we have had visitors from 63 different countries and 44 states and provinces in the United States and Canada to this blog over the past two months. Most visitors are from the United States, the United Kingdom, Canada, Poland, and Keyna. The most popular postings this past week were “Thomas Hobbes on Private Property,” “The Purpose of Production,” “You Asked, Kelso Answered,” “Aristotle on Private Property,” and  “What is a Central Bank Supposed to Do?”