Silly persons like to point out that every right Saint Thomas died to defend was eventually recognized as being properly the purview of the civil order, so that his death was — in their eyes — totally useless and meaningless. Some even end up agreeing with Henry VIII Tudor, who put Saint Thomas on trial for high treason post mortem, that the Archbishop was a consummate villain who was trying to assert the supremacy of the Church over the State . . . rather than the supremacy of the State over the Church, as Henry Tudor did.


Again, that was never the point. What mattered was that Henry II Plantagenet was claiming — by right — certain privileges and immunities that the Church in England had always had, regardless how well or ill it managed to defend them over the centuries. Henry did not make an argument or present a case to support his contention. Like many people today, he simply asserted it as self-evident. He wanted it, therefore it was his.

Archbishop Becket, however, knew that whether the rights over which they struggled properly belonged to the Church or to the State, they were — at present — recognized as belonging to the Church. Further, Thomas knew Henry well enough to know that had the king managed to get his way in this instance, he would soon begin encroaching in other areas as well — areas that were not as gray as whether clergy accused of civil crimes should be judged in a civil or Church court, the latter being the custom of centuries.

Thomas was well aware that surrendering in a minor matter would mean surrendering as well such things as the power of clerical appointments, and even the determination of doctrine. Truth would become a political football, and sacrificed to expedience whenever it became uncomfortable. Ultimately (as indeed proved to be the case under the Tudors), the Church would become the State’s lackey, enforcing politically motivated religious doctrine with the coercive power of the State.

What happened is well known. King Henry, a man with the notoriously short Plantagenet temper, became so enraged at the stubbornness of Archbishop Thomas and his refusal to act reasonably (i.e., to give Henry what he wanted) that he spoke words at a banquet, probably without thinking of the power that the words of a powerful or influential man often have over subordinates: “What sluggish knaves are these of my kingdom! Is there not one that will rid me of this troublesome priest?” Four knights took this as a royal command, and that very night crossed the Channel to England, eventually murdering the Archbishop.

The outcry was enormous and immediate throughout the whole of Europe. Whether or not he consciously intended that anyone should act on his intemperate utterance, Henry was held responsible for Thomas’ death — as, indeed, he was. A public figure or journalist who openly and publicly advocates anything — even in jest — is responsible for what happens when someone acts on it. The newspaper reporter who published a map to the house of Medgar Evers and hinted that he should be killed was as responsible for the murder as the man who pulled the trigger. It is the equivalent of yelling, “Fire!” in a crowded theater.

Henry’s words — regardless whether or not the death of Thomas was his intent — made the king guilty of murder. Only public penance saved him from excommunication and loss of his throne. Even so, the sins of the fathers are visited on the sons. When the Barons of England rose against King John, Henry’s son, they were able to count on the help of Stephen Langton, Archbishop of Canterbury, and successor to Saint Thomas à Becket.

Nor could King John do very much about it. John certainly made Archbishop Langton’s life miserable, but John had nowhere near the popularity of his father or his brother, Richard the Lionheart. John could not risk actually harming Stephen and creating another martyr. Consequently the king was forced to accede to the Great Charter — Magna Charta — reaffirming the rights and privileges recognized by his ancestor, Henry I Plantagenet, a century before. First and foremost among these rights were, of course: 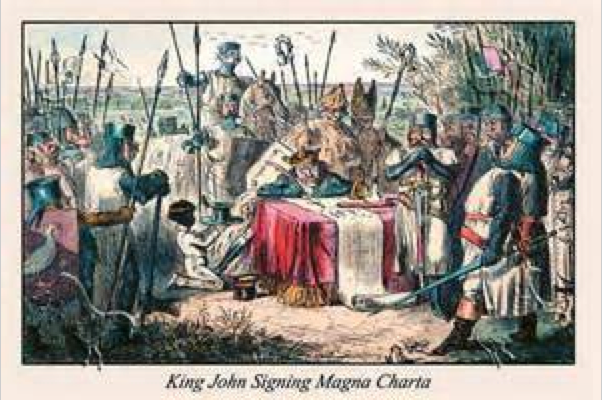 Have in the first place granted to God, and confirmed by this our present charter, for us and for our heirs forever,

That the churches of England shall be free, and shall enjoy their rights and franchises entirely and fully: and this our purpose is, that it be observed, as may appear by our having granted, of our mere and free will, that elections should be free (which is reputed to be a very great and very necessary privilege of the churches of England) before the difference arose betwixt us and our barons, and by our having confirmed the same by our charter, and by our having procured it moreover to be confirmed by our lord the apostle Innocent the third. Which privilege we will maintain: and our will is, that the same be faithfully maintained by our heirs forever.

The Founding Fathers of the United States of America, based on this noble tradition, also promised to protect the rights of Church against the encroachment of the State, particularly the evil of any religion established as a State bureaucracy or branch of the government. The reader may judge for himself how well the United States has adhered to the clear intent of its Founding Fathers in this and other matters.