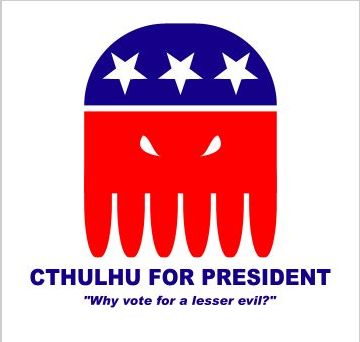 We used to have an annual series of “Halloween Horror Specials” on this blog for the entire month of October.  Then we shortened it to a week.  Last year we didn’t post anything.  Why?  The entertainment value of horror (especially if there is an attempt, however weak, at humor, e.g., Army of Darkness) depends on the ultimate conviction that none of it is real.  It might make you think (e.g., Mary Shelly’s Frankenstein . . . who was the creator of the monster, not the monster, by the way), or just entertain (H.P. Lovecraft’s Cthulhu Mythos . . .  not that we’re entertained particularly by horror, especially of that subgenre) but you know, ultimately, that it’s not happening and you can go to sleep safely.  After you’ve checked under the bed one more time.  Or maybe two. . . . 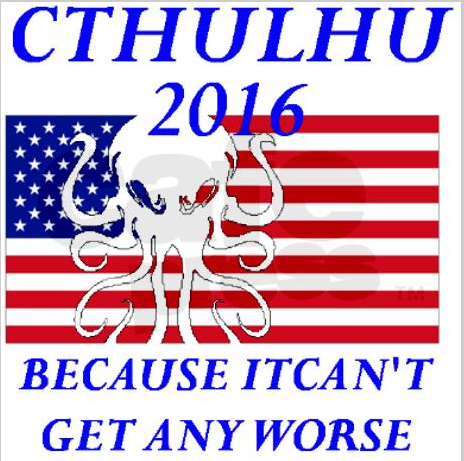 Thus, the more surreal reality gets, the less entertaining horror becomes, at least for us.  Especially in the economic and political realm it seems as if things couldn’t get any worse.  So, of course, they get worse — and will continue to do so until some leader with vision (no, that’s not an oxymoron) gets wise and starts pushing to enact a Capital Homestead Act as soon as possible.  Hasn’t it occurred to anyone that the only thing behind the incredible rise in the stock market is trillions of dollars in government debt?

Perhaps the most surreal thing about the world today is the ease with which people have abandoned reason.  Nowhere is this more evident than in organized religion, especially the “thinking” religions such as Judaism, Christianity, and Islam.  Reason illuminated and guided by faith has been replaced with faith alone . . . meaning whatever someone finds most comforting and thus wishes to believe, no matter how irrational it might be.

Language — the means by which we communicate with others — has been one of the chief victims of the abandonment of reason and the means by which some seek to control other people.  Added to that is the habit people have of hearing only what they want to hear.  The result is mass confusion everywhere, in the Family, the State, and the Church.

Not to single out organized religion for (undue) criticism, but all this was brought forcibly to mind yesterday when we came across an article commenting on (i.e., complaining about) the confusing use of language in Catholic parishes.  Again, we’re not picking on organized religion here, or even Catholicism.  This is simply an example that highlights a problem that pervades society at all levels, and, incidentally, gives one more reason why we need something like “Justice University.”

So, not to single out Catholics, but “Catholic language” is no more incomprehensible than any other reason-based form of communication.  The problem is that many people have simply abandoned reason in their quest for what Chesterton called “the god within,” whether in domestic, civil, or religious society.  Reason gets in the way of this.

This was the problem that, in our opinion, Leo XIII addressed in Rerum Novarum.  The chief of the “new things” he looked at were the distortions forced on reason, especially the individual virtues, as he had hinted earlier in Æterni Patris.

Well-intentioned people attempting to deal with rapidly changing social and economic conditions had seriously distorted understanding of the individual virtues.  Under the label of “social justice” they had changed the definitions of the virtues, especially justice and charity, and shifted the basis of the natural law from the Intellect to the Will.  This was the first step in achieving complete moral relativism, even nihilism.  The understanding of the natural law became based on faith alone instead of reason illuminated and guided by faith.

Thus, as Fr. John Trigilio, president of the Confraternity of Catholic Clergy, pointed out in his doctoral thesis, Leo XIII’s philosophy was less flexible . . . from the individual perspective, that is.  From the social perspective, however, it became infinitely flexible.  This is what Pius XI discerned in Leo XIII’s work and made the basis of his completed social doctrine, giving a precise definition to the formerly vague and misleading term “social justice.”

Unfortunately, Msgr. John A. Ryan of the Catholic University of America failed to realize the implications of Leo XIII’s integrated expansion of moral philosophy from individual ethics (bios theoretikos) to social ethics (bios politikos), and systematized the distortions forced on the individual virtues that Leo XIII had taken great pains to correct.  Ryan’s books, A Living Wage (1906) and Distributive Justice (1916) are today taken as normative, while social ethics is, in many circles, a dead letter.  What the solidarist economist Franz H. Mueller called “meliorism,” i.e., a total focus on meeting people’s individual material needs at all cost, regardless of the consequences, has become, thanks to Ryan’s influence, the sum total of “Catholic” social teaching for many, as well as the overriding political and social goal.

A good case can be made that, just as Leo XIII appears to have issued Rerum Novarum in part to respond to the proposals of both Karl Marx and Henry George, Pius XI may have issued Quadragesimo Anno in part to counter the spread of Ryan’s teachings — the mention of controversies that were stirred up, “that are not always peaceful” (Quadragesimo Anno, § 40), sounds suspiciously like the campaign that Ryan waged against Fulton J. Sheen, and that resulted in sabotaging Sheen’s academic career at Catholic U.; some years later Sheen referred to a “cross” that he had borne for ten years that correlates with the time frame during which he was subjected to Ryan’s animus.

Thus, instead of adhering to Benedict XV’s admonition to do “Old things, but in a new way” (Ad Beatissimi Apostolorum, § 25), the Catholic Church (as well as civil society — cf. William Crosskey’s Politics and the Constitution in the History of the United States, 1953) has split into factions.  You have the liberal modernists (“the modernists”) who insist that everything must change because their faith demands it, the conservative modernists (“the traditionalists”) who insist that nothing must change because their faith demands it, and the muddled middle who don’t know who is right because they’ve forgotten how to reason and, with the way language is constantly being shifted and manipulated, wouldn’t know what to think about even if they could.

To top it off, much “Catholic” thought has been infiltrated by theosophical (“New Age”) concepts.  As one example, one of America’s “top ten Catholic intellectuals” recently included E.F. Schumacher’s theosophical tract A Guide for the Perplexed (1977) on a “Catholic” reading list.  Schumacher’s Small is Beautiful (1973), originally billed as “the New Age guide to economics,” was strongly influenced by both Keynes and Fabian socialism, a combination of expanded georgist agrarian socialism and theosophy.  “SIB” is today regarded as a virtual guidebook for latter day Professional Chestertonians and neo-distributists.  Ironically, Chesterton detested theosophy or, more accurately, theosophists, referring to their “shiny pebbly eyes and patient smiles” in his autobiography.

In short, many people are baffled by “Catholic language” because for almost 200 years there has been a concerted effort to remove meaning from all language.  Yes, all are “welcome” . . . except for those who do not exhibit the proper faith-based sentiments and espouse the “right” ideas and proposals.  As a result, people are being driven from the Church as well as the Family and the State by the very people who insist that “all are welcome.”  As John Paul II pointed out,

“As I have already noted, love for the poor must be preferential, but not exclusive. The Synod Fathers observed that it was in part because of an approach to the pastoral care of the poor marked by a certain exclusiveness that the pastoral care for the leading sectors of society has been neglected and many people have thus been estranged from the Church. The damage done by the spread of secularism in these sectors — political or economic, union-related, military, social or cultural — shows how urgent it is that they be evangelized, with the encouragement and guidance of the Church’s Pastors, who are called by God to care for everyone. They will be able to count on the help of those who — fortunately still numerous — have remained faithful to Christian values. In this regard the Synod Fathers have recognized “the commitment of many leaders to building a just and fraternal society”.  With their support, Pastors will face the not easy task of evangelizing these sectors of society. With renewed fervor and updated methods, they will announce Christ to leaders, men and women alike, insisting especially on the formation of consciences on the basis of the Church’s social doctrine. This formation will act as the best antidote to the not infrequent cases of inconsistency and even corruption marking socio-political structures. Conversely, if this evangelization of the leadership sector is neglected, it should not come as a surprise that many who are a part of it will be guided by criteria alien to the Gospel and at times openly contrary to it.”  (Ecclesia in America, § 67.)

There.  Was that horrible enough for you?