What is a “Bill of Exchange”?

This past Friday we got a question about bills of exchange, the financial instruments we’ve been talking about for some time.  Specifically, someone said, “‘discounting bills of exchange’ is something that I have been trying to wrap my head around for a while. In layman's terms, what does it mean?”


Good question.  Most simply put, “bills of exchange” are a form of “money.”  That means to understand bills of exchange, we need at least a working definition of money.

“Money” is anything that can be accepted in settlement of a debt.  It is the medium of exchange, by means of which we exchange what we produce, for what others produce so that goods and services can be consumed.  (This is "Say's Law of Markets.") As Adam Smith pointed out, and which formed the basis for his economic theories, the sole purpose of production is consumption.

Money facilitates both production and consumption.  It does this by providing a convenient way to obtain what we need to produce, and to trade what we produce for what others produce.

All money is therefore a contract, just as (in a sense) all contracts are money.

All contracts consist of “offer,” “acceptance,” and “consideration.” “Consideration” is whatever of value is being exchanged, something that has been or will be produced.

There are two basic types of contracts by means of which exchanges are carried out.  These are called “mortgages” and “bills of exchange.”  Financial historian Benjamin Anderson claimed that the first principle of finance is to know the difference between a mortgage and a bill of exchange. 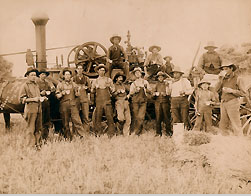 You offer a contract called a bill of exchange that has a face value of $100,000 to a commercial bank, since the discount rate for a 90-day bill is 2%. The banker “accepts” or “discounts” your bill, making it a “bankers acceptance.”  To purchase the bill, the banker issues a promissory note obliging the bank to pay you $98,000 now in exchange for your $100,000 in 90 days.  The banker then creates a demand deposit in your name in the amount of $98,000, using the promissory note as backing for the checking account.  (The bill of exchange obliges you to pay, while the promissory note obliges the bank.)

You could also offer bills directly to your suppliers, making them “merchants acceptances” or “trade acceptances,” but the bank’s word is probably better known.  In any event, it is extremely inconvenient to go around issuing a lot of small bills to a lot of people, instead of one bill to one institution that specializes in accepting bills and mortgages.

Before the invention of coined money in the west, cir. 2,700 years ago, all exchanges were carried out this way with mortgages, bills of exchange, and promissory notes.  The vast bulk of documents from the ancient world, in fact, consist of financial instruments of this sort, whether on clay, papyrus, parchment, or anything else.