We’re not going to get into issues like why the stock market is soaring at a time when the economy is so bad, or the ins and outs of the reform of healthcare reform, or how increasing the minimum wage is supposed to create jobs and put people back to work.  We’d rather stick with easy subjects like the meaning of life and trying to figure out why so many people prefer the contradictions of Keynesian economics over the common sense of binary economics.


That being the case, here’s what we’ve been doing this past week: 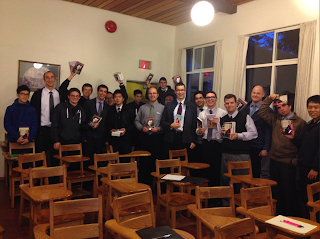 • Al Smith in Canada has had a great deal of success promoting the Just Third Way Edition of Fulton Sheen’s Freedom Under God.  Along with a number of other titles by Sheen, the book is very popular in the schools he has been visiting.  As you can see from the photo (or maybe not, if you're squinting at one of those teeny little screens, the students all seem very happy to receive any materials by Sheen.

• The revision of CESJ’s 1994 bestseller (in small press terms) Curing World Poverty: The New Role of Property is proceeding apace.  Progress is a little slower than originally anticipated, as some influential and well-placed individuals have expressed interest in having articles included in the new compendium.  We anticipate that the revision could have an even greater impact than the original.

• We have recently come across a number of items from newspapers and journals dating from the early 1880s to the late 1930s that help us piece together a small part of the story as to how the world got off the track that was leading to the Just Third Way.  As we will be seeing in the current blog series on Chesterton, a large part of the problem resulted from misunderstandings of money, credit, private property, freedom of association, and even the natural law itself that resulted from efforts to deal with what Louis Kelso and Mortimer Adler called “the slavery of past savings.”

• Again, the big news is that a short time ago we released Freedom Under God for printing.  CESJ is now taking bulk/wholesale orders (please, no individual sales).  The per unit price for ten or more copies is $16.00 (20% discount).  Shipping is extra.  Send an e-mail to “publications [at] cesj [dot] org” stating how many copies you want and the street address (no P. O. Boxes) where you want them delivered.  We will get back to you with the total cost, how to pay, and estimated delivery time.  All payments must be made in advance, and orders are placed only after payment clears.

• Michael D. Greaney, CESJ’s Director of Research, has published a collection of essays about the fiction of Nicholas Cardinal Wiseman, John Henry Cardinal Newman, and Monsignor Robert Hugh Benson.  The book is titled, So Much Generosity, and is expected to be available on Amazon and Barnes and Noble within a couple of weeks.  Many of the essays, as you might expect, incorporate elements of the Just Third Way.  The book is priced at $20.00, and there is a 20% discount on bulk orders (i.e., ten or more), which can be ordered by sending an e-mail to publications [at] cesj [dot] org.  We’ll let you know when it becomes available on Amazon and Barnes and Noble.

• As of this morning, we have had visitors from 64 different countries and 53 states and provinces in the United States and Canada to this blog over the past two months. Most visitors are from the United States, the United Kingdom, Canada, Australia, and India. The most popular postings this past week were “Thomas Hobbes on Private Property,” “Aristotle on Private Property,” “The Fulton Sheen ‘Guy’,” “News from the Network, Vol. 6, No. 44,” and “The Purpose of Production.”