Thanks in large measure (read “due completely to his efforts”) to Guy Stevenson, the Project Manager of “The Fulton Sheen Project,” Economic Justice Media’s “Just Third Way Edition” of Freedom Under God, Fulton J. Sheen’s “long lost” work on the importance of private property in capital was published on Labor Day, September 2, 2013. [UPDATE: NOW AVAILABLE ON AMAZON] [FURTHER UPDATE: NOW AVAILABLE ON BARNES AND NOBLE] 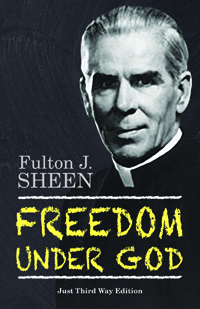 Due to a few administrative glitches at our end (not the printer’s or Guy’s fault), copies are not yet available.  We expect to be able to fill bulk orders within two weeks at the latest, while individual copies should be available from on-line retailers like Amazon and Barnes and Noble, and “brick and mortar” bookstores by special order soon after that.  (CESJ/Economic Justice Media does not make retail sales.)

We were somewhat skeptical a few years ago when Guy first raised the possibility of republishing some of the late Fulton J. Sheen’s works.  After all, most of us in the CESJ core group were familiar with Sheen as one of the first, perhaps the first of the “televangelists.”  We knew that Sheen had done great things for the Catholic Church, but CESJ is an interfaith group.  Plus, Sheen had a lot to say about matters of faith, while CESJ is focused on reason.

Then there was the small matter that, in his will, Sheen bequeathed all of his copyrights to the Society for the Propagation of the Faith, of which he served as National Director for many years.  The idea seemed to be that by keeping his books in print, the Society could not only continue to spread the word, but make a little money in the process.

It turned out, however, that Sheen only bequeathed those copyrights that he himself owned.  It’s a legal principle that you can’t give anyone greater rights than you have in the first place.

To top it off, the Bruce Publishing Company went out of business at about the time they needed to renew the copyright, and never got around to doing so.  The book Freedom Under God entered the public domain on January 1, 1968.  It was clearly well on its way to oblivion.

. . . until rescued by Guy Stevenson.  Long before Pope Benedict XVI declared Fulton Sheen “Venerable” (“worthy of veneration,” which means respect, not worship), Guy had been studying Sheen’s works, and was convinced that television’s “Uncle Fulty” of Life Is Worth Living is an important writer — and for more reasons than are apparent to most people.

It turns out that Sheen’s writings on political science and philosophy are (to put it mildly) revolutionary, especially to a generation of Americans (not just Catholics or other Christians) familiar only with the “tastes-great/less-filling” socialism v. capitalism argument.  So many social reformers start with the assumption that capitalism (with its many forms under one name) and socialism (with its one form under many names) are the only two possibilities.

Consequently, those who consider themselves capitalists label everything else socialism, while those who are socialists (few socialists actually call themselves socialists, evidently believing that if you don’t admit it, you ain’t it) attack everyone else as capitalists.  Neither group can really deal with someone like Fulton Sheen, who clearly was for neither capitalism nor socialism, and so both sides carefully sweep that aspect of his thought under the rug.

It didn’t make it any better that Sheen managed to get on the bad side of two people, both of whom were as powerful as they were vindictive.  The first was Monsignor John A. Ryan, whose distortions of natural law theory that underpins Catholic social teaching have become “social justice orthodoxy” in spite of Ryan’s obvious errors and drift into the “corporate” form of socialism.  The second was Francis Cardinal Spellman, whose anti-communism and support for U.S. involvement in Vietnam (to say nothing of his friendships with J. Edgar Hoover and Senator Joseph McCarthy) made him a virtual poster boy for capitalism.

Sheen downplayed his troubles with both men in his autobiography, Treasure in Clay (1979).  Guy, however, has found newspaper articles inspired by one or the other from the 1930s on attacking Sheen on some rather specious grounds — such as Sheen quoting directly from Quadragesimo Anno when Ryan wanted to bury a particular papal teaching.  A 1937 article in the Pittsburgh Gazette in which the “Radical Catholic Alliance” (a Ryan front group) condemned Sheen for alleged anti-Catholic activities is one surreal example, while most people are aware of the “Milk Fund Scandal” when Spellman was caught lying to Pope Pius XII about a false accusation Spellman made against Sheen.

What Guy discovered was that Sheen’s political science and philosophy are strikingly parallel to CESJ’s Just Third Way.  The only things lacking are an understanding of finance that is not based on past savings, and a better appreciation of Pope Pius XI’s breakthrough in moral philosophy as analyzed by CESJ co-founder Father William Ferree — and grasping either, given the erudition and scholarship displayed in Sheen’s first book, God and Intelligence (1925), would have been child’s play for Sheen.

Mentioning God and Intelligence, which won for Sheen the “Agrégé en Philosophie de l’Université de Louvain” (which, according to one source, has been awarded at the level Sheen received it by only about forty people since the university was founded in 1425), brings in another possibility why Sheen’s contributions to philosophy may have been glossed over.

Yes, God and Intelligence is a very tough book to get through, especially in our day when more people would benefit from reading Mortimer Adler’s How to Read a Book (the first edition of which, by coincidence, was published in 1940, the same year as Freedom Under God).  It’s the point of the book, however, that makes its author’s philosophy obnoxious to the modern age.  Sheen went after the modern tendency to redefine the basic principles of just about everything, shifting the natural law from its basis in the intellect (meaning it can be discerned by reason alone), to the will (meaning that faith, not reason, becomes the basis of the natural law).

The modern age constantly violates the principle of contradiction and the principle of identity. (These are actually the “negative” and “positive” ways of saying the same thing.)  This may be either the cause or the symptom of the totalitarian movements of the 20th and 21st centuries.  You’ll have to answer that question yourself.

One thing that’s certain, however, is that the moral relativists who have built their careers on shifting sand are not anxious to correct their philosophy to something built on the solid rock of common sense.  Why?  Sheen answered that question himself in his autobiography: money and fame, combined with a colossal egotism.  Far too many academics, politicians, and others owe everything to moral relativism, and they’re not about to change.