To finish off our short series of blog postings on science fiction and social justice, we thought we’d take a look at how the whole idea of social justice — properly understood, of course — fits in to the “world” of science fiction.  It’s not as great a stretch as it might seem at first glance. 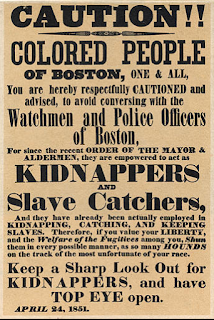 Thus (to take a rather simplistic example), if there were a law, say, prohibiting distribution of alms, or freeing slaves.  We’ve heard rumors of the former recently, where it has been alleged that some municipalities have forbidden churches and other charitable institutions from feeding homeless people.  The latter was hardly a rumor: the Fugitive Slave Act of 1850 required people even in the free states to capture and return runaway slaves to their owners.
We don’t know if any law against feeding homeless people was either enforced or disobeyed, but the Fugitive Slave Act was the most widely disobeyed and flouted law in U.S. history until the Volstead Act (“Prohibition”).  Even so, it wasn’t repealed until 1864, long after it had become a dead letter.
Now for the trick question: are people who feed the hungry or who assisted runaway slaves (or at least didn’t report them) engaged in acts of social justice?
No, they were not.  They were still carrying out corporal works of mercy, whether justice or charity is not an issue for the purposes of this discussion.
Was social justice involved in any way in these two examples?
Definitely.  In the first case, it is socially unjust to pass a law prohibiting acts of charity.  In the second case, it is socially just to repeal an unjust law.
The key to understanding this is that social justice relates to institutions, not to individuals directly.  Thus, it is and will always be individual charity to feed the hungry, regardless how many you feed.  It is social justice to make it possible to feed the hungry or (better) for the hungry to feed themselves.
You see the difference?
Now, how does this relate to science and science fiction and fantasy?
Science fiction and fantasy generally deal with “what if?” situations.  In the nineteenth century even diametrically opposed science fiction writers like Jules Verne and H.G. Wells dealt in their respective ways with the question of What If? — what if existing technology was used to do thus-and-so? (Verne), or what if time travel was possible or Martians invaded the Earth? (Wells).
Thus, in a very broad way, science fiction “enables” science (or, more accurately, scientists and inventors) by presenting them with new visions to think about, and perhaps implement.
That, however, is not the point we want to make here.  It’s been made many times before, to the point of redundancy, how science fiction “predicted” such-and-such a thing.
No, our point is that, while science fiction can think up some wonderful ideas, and the scientists and inventors can even create them . . . how are you going to implement them?
The quick answer is, “Through acts of social justice,” to which in most cases we need to add, “and adherence to the principles of economic justice” . . . which is what we will go into on Tuesday of next week.  Maybe.
#30#
Posted by Michael D. Greaney at 6:00 AM