Some people in the nineteenth century considered Orestes Brownson a bit of a crank.  He kept insisting that he wanted to know what was true, not what was convenient, expedient, or popular.  That creates a bit of a problem when what you come to believe is true is inconvenient, not very expedient, or unpopular, especially when it annoys other people who don’t care to be reminded that truth is always true and prefer to go with opinions, preferably their own.


Thus Brownson, when (like G.K. Chesterton) he converted to Catholicism on the grounds that he believed it to be true, annoyed quite a number of people, many of them socialists . . . just like the people that Chesterton annoyed by his conversion (as were, it seems, a significant number of capitalists, capitalism being almost as bad as socialism).  George Bernard Shaw really got incensed about it.  Of course, GBS got incensed about everything.  (To give the Devil his due, Shaw usually had plausible sounding arguments to back it up, even if you didn't agree with him.  Unlike some people, he didn't just rant and rave and attack others.)
After converting to Catholicism in 1844, Brownson went to work countering false European notions of democracy that put sovereignty in the people as a whole, with a true American — and Catholic — understanding that put sovereignty in each and every human being (unlike capitalism, which puts sovereignty in just an élite few).  As might be expected, this got Brownson accused of hypocrisy by both liberal and conservative Catholics as well as capitalists and socialists.
Brownson had, after all, used his Quarterly Review to promote religious/democratic/utopian/etc. (take your pick) socialism and give it credibility to counter the growing problem of capitalism.  Even before newspaperman and socialist Horace Greeley gave space to "Associationist" Albert Brisbane, Brownson published Brisbane’s articles and those of other Fourierists in the Review.  Had it not been for Brownson’s initial patronage, it is likely that Fourierism would not have caught on nearly as fast as it did.
Fourierist socialism was not, however, Brownson’s primary concern following his conversion.  He considered Neo-Catholicism, the body of thought developed by the Abbé Félicité de Lamennais (before de Lamennais renounced Christianity) to be the most attractive, and therefore the most dangerous, form of socialism.
This is because Neo-Catholicism was the most successful at presenting itself as “true Christianity.”  Many authorities down to the present day, in fact, continue to hold up de Lamennais as the founder of liberal or social Catholicism — two terms that should really not be considered the same.
As a Catholic, Brownson contended that Neo-Catholicism was not truly Christianity at all.  Rather, it had appropriated Catholic symbols, and imputed to them non-Catholic meanings.  Thus, Neo-Catholicism —
. . . rejects in name no Catholic symbol; it only rejects the Catholic sense.  If it finds fault with the actual Church, it is because she is not truly Catholic, does not understand herself, does not comprehend the profound sense of her own doctrines, fails to seize and expound the true Christian idea as it lay in the mind of Jesus, and as this enlightened age is prepared to receive it.  The Christian symbol needs a new and a more Catholic interpretation, adapted to our stage in universal progress. (Brownson, “Socialism and the Church,” Essays and Reviews, op. cit., 499-500.  Cf. “Religious Union of Associationists,” The American Whig Review, March 1847, 492-502.)
It was not, however, the hijacking of the outward forms of Catholicism by de Lamennais and his disciples that most concerned Brownson.  It was the “theory of certitude” and the European-socialist form of democracy it engendered.  De Lamennais’s theory of certitude is that God grants reason only to the collected mass of humanity, not to individuals.  Individual human beings must accept truth on faith, not on reason.
The idea that truth must be accepted only on faith is a notion condemned in the First Vatican Council, the Oath Against Modernism, and Humani Generis, among other Magisterial documents.  The official position of the Catholic Church is that God creates human beings with the capacity to reason, and human beings create the collective with their reason through “abstract thinking.”  Even faith is to be grounded on reason.
Some years after Brownson critiqued de Lamennais’s theory of certitude, a Catholic priest, troubled by what he read in Brownson’s Quarterly Review, asked Brownson how as a Catholic he justified his position on democracy, freedom of religion, and separation of Church and State in light of Mirari Vos, the first social encyclical.  In “La Mennais and Gregory XVI,” published in the July 1859 issue of the Review, Brownson explained at length that what the pope condemned in the 1832 encyclical were the ideas prevalent in Europe, not America.
European notions of democracy, freedom of religion, and separation of Church and State were rooted in the theory that the State or the collective is sovereign — as in de Lamennais’s theory of certitude — not actual human beings as was the case in the United States.  As a result, the European notion of democracy ultimately either inserted God into the equation artificially by faith (instead of reason guided and illuminated by faith), or removed Him altogether. 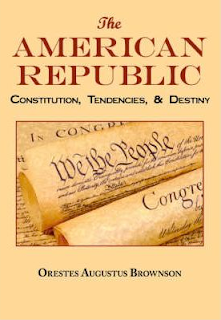 Brownson expanded on this in what many consider his greatest work, The American Republic (1865).  Writing “as a Catholic, because all Christian principles, nay, all real principles are catholic, and there is nothing sectarian either in nature or revelation,” and because “I could not write otherwise if I would, and would not if I could,” he stated his thesis:
The United States, or the American Republic, has a mission, and is chosen of God for the realization of a great idea. . . . Its idea is liberty, indeed, but liberty with law, and law with liberty. Yet its mission is not so much the realization of liberty as the realization of the true idea of the State, which secures at once the authority of the public and the freedom of the individual — the sovereignty of the people without social despotism, and individual freedom without anarchy. In other words, its mission is to bring out in its life the dialectic union of authority and liberty, of the natural rights of man and those of society. The Greek and Roman republics asserted the State to the detriment of individual freedom; modern republics either do the same, or assert individual freedom to the detriment of the State. The American republic has been instituted by Providence to realize the freedom of each with advantage to the other.
Thus — as far as Brownson was concerned — socialism is based on a theory utterly foreign to Christian (or any other kind of) truth.  It puts the collective created by man above man created by God, and offends against the dignity of each human person.  It also offends against God by putting Collective Man at the center instead of God.
Christian socialism?  Religious socialism?  Democratic socialism?  Call it what you will, it is not compatible with truth.
#30#
Posted by Michael D. Greaney at 6:00 AM