As the level of anxiety about the world situation continues to increase, so does the studied avoidance of the Just Third Way, which alone holds any promise of rectifying the situation.  This is made pretty clear from this week’s news items:
• Much to our surprise, the current blog series on “Philosophies at War” (triggered by obtaining a rare copy of Fulton Sheen’s book, Philosophies at War from 1943) seems to have touched on something visceral.  Evidently a lot of people were unaware of the extent to which “the Triumph of the Will” has infiltrated the modern age.  In constitutional law we see it in the shift from “original intent” to the idea of the “living constitution” and the transformation of inalienable rights into expedients or “prudential matter.”  In political economy we see it in the shift away from a society characterized by widespread capital ownership to capitalism and socialism.  In religion we see it in the abandonment of the idea of the natural law discernible by reason, and to one based on faith, that is, the Will.  Unfortunately, the best books to read on this subject are either rare, or are generally misunderstood.  For example, in the field of constitutional law, William Winslow Crosskey’s Politics and the Constitution in the History of the United States (1953) is virtually unobtainable.  In political economy, most people think that Mortimer Adler’s and Louis Kelso’s The Capitalist Manifesto (1958) and The New Capitalists (1961) are about “capitalism” instead of true economic democracy.  Nobody reads Heinrich Rommen’s The Natural Law (1945) with any degree of comprehension, while most readers think that G.K. Chesterton’s Orthodoxy (1908), Saint Francis of Assisi (1923) and Saint Thomas Aquinas: The “Dumb Ox” (1933), Fulton J. Sheen’s God and Intelligence in Modern Philosophy in Light of the Philosophy of Saint Thomas (1925), and Msgr. Ronald Knox’s Enthusiasm (1950) are about other things entirely!  And that’s only the tip of the iceberg.  There do seem to be some glimmerings that people are starting to wake up to the fact that something is terribly wrong, however: the dead silence coming from “the experts” is one sign that they are desperately hoping all the fuss will die away and people get back to accepting what they say without questioning it.
• Yesterday, George Will’s column in The Washington Post, “Time is Running Out on Pensions,” (02/23/17, A17), made some good points . . . but completely missed the obvious solution sent to him a few weeks ago by Dr. Norman G. Kurland, president of CESJ.  OBVIOUSLY public sector pensions cannot meet all the promises they continue to make with so lavish a hand.  Is the answer to stop making lavish promises and let public sector workers fend for themselves on smaller pensions or no pensions?  That’s half the answer, but it’s not a solution just to tell people to stop doing what they shouldn’t be doing in the first place.  What is the real solution to the growing pension problem?  The Capital Homestead Act.  Although you knew we were going to say that, it’s still the right answer.  By enabling public sector workers to acquire self-liquidating, income-generating assets on credit that provide consumption income once the acquisition debt is repaid, the problem is self-solving, and would disappear within a generation, and be of manageable proportions immediately.
• Earlier this week The Wall Street Journal had an editorial claiming how President Trump’s plan to try and build up a trade surplus is wrong-headed.  They were right . . . up to a very small point.  They then tried to make the case (by assertion) that trade deficits are not only good, but necessary!  They were wrong — on all points.  First, yes, ordinarily speaking, trade surpluses are not completely good.  Neither are deficits.  The ideal, in conformity with Say’s Law of Markets, is to have a true balance of trade, neither importing more than is exported, nor exporting more than is imported.  Trying to stack the deck one way or another inevitably leads to currency manipulation, trade barriers, and wars.  Even if a country does not directly produce all that it consumes, it must produce the value of all that it consumes to trade to others for what it consumes.  And, because (as Adam Smith put it) “Consumption is the sole end and purpose of production,” a country should produce the value of what it consumes, no more, no less.  That being said, the United States has been running tremendous trade deficits — and not only in goods and services.  It has exported incredible amounts of debt.  In order to redeem that debt, the U.S. must now export a surplus of goods large enough to “buy back” the debt and cancel it.  So, is President Trump doing the right thing?  Well . . . no.  He has the right idea: get out of debt.  He’s just doing it the wrong way.  The only way to have honest trade surpluses is to become more productive to redeem all the consumption that took place over the past century or so.  And that is only going to happen with a Capital Homestead Act.
• Federal Reserve officials are starting to tinker with money manipulation again.  They haven’t figured out that a central bank is not a government money machine, but a means of providing adequate liquidity for the private sector and maintaining a stable, elastic, and asset-backed currency . . . all of which can be done by passing a (you guessed it) Capital Homestead Act. 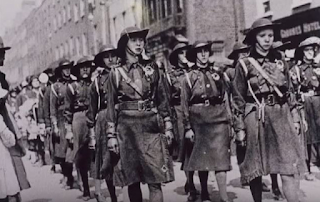 • CESJ’s latest book (makes a great pre-Easter gift . . . obviously), Easter Witness: From Broken Dream to a New Vision for Ireland, is available from Amazon and Barnes and Noble, as well as by special order from many “regular” bookstores.  The book can also be ordered in bulk, which we define as ten copies or more of the same title, at a 20% discount.  A full case is twenty-six copies, and non-institutional/non-vendor purchasers get a 20% discount off the $20 cover price on wholesale lots ($416/case).  Shipping is extra.  Send enquiries to publications@cesj.org.  An additional discount may be available for institutions such as schools, clubs, and other organizations as well as retailers.
• Here’s the usual announcement about the Amazon Smile program, albeit moved to the bottom of the page so you don’t get tired of seeing it.  To participate in the Amazon Smile program for CESJ, go to https://smile.amazon.com/.  Next, sign in to your account.  (If you don’t have an account with Amazon, you can create one by clicking on the tiny little link below the “Sign in using our secure server” button.)  Once you have signed into your account, you need to select CESJ as your charity — and you have to be careful to do it exactly this way: in the space provided for “Or select your own charitable organization” type “Center for Economic and Social Justice Arlington.”  If you type anything else, you will either get no results or more than you want to sift through.  Once you’ve typed (or copied and pasted) “Center for Economic and Social Justice Arlington” into the space provided, hit “Select” — and you will be taken to the Amazon shopping site, all ready to go.
• We have had visitors from 38 different countries and 45 states and provinces in the United States and Canada to this blog over the past week (Google “improved” their analytics, making it impossible to see trends longer than a week instead of the previous two months). Most visitors are from the United States, Canada, the United Kingdom, Australia, and Nigeria. The most popular postings this past week in descending order were “Philosophies at War, VI: Chesterton Versus the New Christianity,”  “Philosophies at War, VIII: The Apostle of Common Sense,” “News from the Network, Vol. 10, No. 7,” “Activism vs. Leadership,” and “Thomas Hobbes on Private Property.”
Those are the happenings for this week, at least those that we know about.  If you have an accomplishment that you think should be listed, send us a note about it at mgreaney [at] cesj [dot] org, and we’ll see that it gets into the next “issue.”  If you have a short (250-400 word) comment on a specific posting, please enter your comments in the blog — do not send them to us to post for you.  All comments are moderated, so we’ll see it before it goes up.
#30#
Posted by Michael D. Greaney at 10:57 AM