Last Thursday we promised (sort of) that today we would talk about how to restructure the financial system to encourage real investment so that people like Sister Lioba Zahn, O.S.B. of the Mariendonk Abbey won’t have to deal in speculation just to keep their heads above water.  This is not as cosmic as it might otherwise appear.  It’s one of the paradoxes of the modern world that the way the financial system is running today is not the way it’s designed or intended to run.

It’s a little like hitching a mule to your Rolls Royce.  Yes, you’ll eventually get somewhere, and you can say that things are working well — mules are pretty efficient draft animals, after all — but you won’t get where you’re going very fast.  You’ll also pretty much wreck the Rolls after a while, not to mention it’s pretty dumb to use an automobile costing nearly $400,000 to do what a buggy costing $1,500 (we checked the price in Lancaster County for an economy model) can do much better.
Now, we really can’t give a detailed plan for restructuring a financial system here.  We don’t even go into too much detail in the book, Capital Homesteading for Every Citizen (2004) — enough, yes, but we don’t answer every question.
What we’ll do instead is give the three things that have to be reformed to reach a specific goal: making it possible for every child, woman, and man to become a real investor, that is, someone who purchases capital for the income and control it conveys, not because they can sell the capital the next day (or next minute) at a profit.  These are the income system, the financial system (obviously), and the tax system.
The Income System

Right now throughout the entire world the basic assumption about personal income is that a wage system job is the only way to gain an income for the great mass of people.  The one thing common to both capitalism and socialism is that a wage system job is the only practical way for most people to have an income.
The problem is that as technology advances, it becomes more cost effective to use technology than human labor to produce marketable goods and services.  This means that as technology produces more and more, and human labor produces less and less, the owners of technology are due more and more of the income, and the owners of labor are due less and less.
To try and correct this, unions and governments start mandating that workers be paid more than can be justified by what they produce, ensuring that owners of technology receive less than their due.  Increasing demands by workers for higher and higher pay when they are producing less and less makes it even more advantageous — sometimes absolutely essential — for the owners of technology to replace workers with yet more technology.
This creates another problem: people without wage system jobs produce nothing . . . and buy no goods or services.  This means that it makes no sense for owners of technology to produce anything, so more workers lose their jobs, making the problem even worse.  To try and stop this, governments try to “create jobs,” or simply redistributes wealth, either by direct taxation or by manipulating the currency, in order to keep demand from falling any further and so keep the economy going, at least until the economy implodes as a result of an increasing gap between the power to produce and the power to consume.
And yet the solution is very simple.  As Louis O. Kelso said more than half a century ago in an interview in Life magazine, “If the machine wants our jobs, let’s buy it” — meaning buy the machine, and gain by right of private property the income the government used to redistribute as welfare.
The Financial System
It’s all very, however, to say displaced workers and anyone else who needs an income should just buy the machines that produce the marketable goods and services on which the economy runs.  The problem is where the money comes from to do that.
This is a problem that should never be a problem.  The financial system was, in fact, designed to provide money to finance capital projects by turning future profits into money now that is used to purchase the capital, which then pays for itself.
That’s because “money” is just the way that people exchange what they produce for what others produce.  Money is a contract, just as (in a sense) all contracts are money.  Anybody who has the capacity to enter into a contract and make good on the promise(s) made can create money, and that money can be used to finance new capital formation.
Once the capital is put to work producing marketable goods and services (and they sell), the borrower (the issuer of the contract) first redeems the contract.  He or she then gets the income from his or her capital to use for consumption.
Everything else in the financial system is supposed to be secondary to this function.  The problem is, many people realized that making money buying and selling other people’s promises (while often necessary) allows them to make money without actually producing anything.  Stock market speculation was born.
It got worse when governments, which set the standards for currency (“current money”), realized that they could make promises and force other people to keep them!  It’s gotten so bad nowadays that many people think the only legitimate money is backed by government debt instead of private sector capital.
Unfortunately, not everyone can issue a contract for the purchase of new capital.  The reason is that only the rich usually have collateral to make good on the contract in case the new capital turns out not to be profitable.  Kelso solved that problem, however: use insurance in the place of traditional collateral.  That way, everybody can buy capital that pays for itself with its own future profits.
There’s one more reform, however.
The Tax System 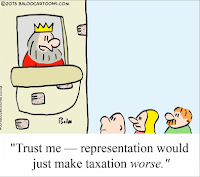 Virtually every tax system in the world assumes that the only way to finance new capital formation and create jobs is to produce more than is consumed, and accumulate the excess as money savings.  We’ve just seen that is incorrect, but the tax system almost everywhere assumes that the rich must be allowed to accumulate as much money as possible so that they will investment the money and create jobs . . . which never actually seems to do anything other than to make the rich get richer.
We think the best way to solve this is to 1) make all dividends tax deductible at the corporate level, and treated as regular income at the personal level unless used to make debt service payments on newly acquired capital (in which case the tax would be deferred), and 2) levy a single tax rate on all income from all sources on anything above what is needed to meet common living expenses, including health and education.  We’ve estimated this would mean that a family of four would pay no tax on the first $100,000, if the exemption is $30,000 per non-dependent, and $20,000 per dependent.
That’s it in a nutshell.  Obviously, this would not do away with the stock market.  In fact, it would have a lot more business being transacted.  The difference is that the activities would be directed toward real investment, not speculation as it is today.
The program is fleshed out a bit more in Capital Homesteading for Every Citizen (2004).  It is available as a free download, too, so there’s no excuse not to read it.
And you wouldn’t want Sister Lioba to find out you didn’t do your homework, again . . . would you?
#30#
Posted by Michael D. Greaney at 6:00 AM