A Modest Meditation on Money 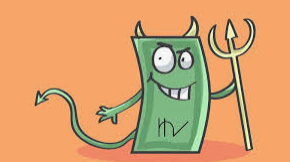 The other day we came across an article in Catholic World Report all about how we shouldn’t make a false god out of money, etc., so on, so forth.  Nothing to see here, move one, yaddah, yaddah.  No, this isn’t a lecture on Catholic or even religious views of money, other than to agree with St. Paul when he reminded Timothy that love of money is the root of all evil.  You can probably find the same thing expressed by most other faiths and philosophies in the world, so it’s not particularly Christian; it’s human.

Paul was a Jewish lawyer, and evidently a pretty good one, but like all attorneys given to a little hyperbole when stating his case.  Thus, other things might be the root of evil, but for now we’ll go along with what he said, if only to get to the main point for today, which is the true nature of money.

The article raised some interesting points, but the analysis embodied a fundamental misconception about money.  That is, that money is itself a commodity instead of a means of measuring value and a medium of exchange.

Money derives its value not from some authority, but because it represents something of value; money has no value in and of itself.  (Currency, or “current money,” may have an intrinsic value, but that is not, strictly speaking, essential to its functioning as money.)  When we view money as a commodity, we make the mistake of assuming value comes from money.  This distorted view of money leads in turn to love of money as a thing to be valued for itself, not as a tool to be valued for what it can do.

Perhaps the lawyer-economist Louis Kelso, renowned as the inventor of the ESOP, said it best.  As he put it,

Money is not a part of the visible sector of the economy. People do not consume money. Money is not a physical factor of production, but rather a yardstick for measuring economic input, economic outtake and the relative values of the real goods and services of the economic world. Money provides a method of measuring obligations, rights, powers and privileges. It provides a means whereby certain individuals can accumulate claims against others, or against the economy as a whole, or against many economies. It is a system of symbols that many economists substitute for the visible sector and its productive enterprises, goods and services, thereby losing sight of the fact that a monetary system is a part only of the invisible sector of the economy, and that its adequacy can only be measured by its effect upon the visible sector. (Louis O. Kelso and Patricia Hetter, Two-Factor Theory: The Economics of Reality. New York: Random House, 1967, 54-55.)

This is very difficult for some people to grasp.  We made a comment on the article that was the basis of this posting, to which some people responded that “real” money must be gold and silver . . . which showed that they completely missed the point.  One commentator cited his high school economics course (instead of a finance course), thereby proving our contention that economists as a rule don’t understand money.

The bottom line here is that if you insist on viewing money and credit as a commodity instead of as a way of valuing, measuring, and exchanging commodities (very broadly understood here as all things transferred in commerce), you are getting yourself into a trap from which you may not be able to extricate yourself.

Are the precious metals the only real form of money?  Jean-Baptiste Say thought otherwise.  As he noted in his first “letter” to the Rev. Thomas Malthus, author of the notorious (and discredited) Essay on Population, when explaining what has come to be called “Say’s Law of Markets” —

All those who, since Adam Smith, have turned their attention to Political Economy, agree that in reality we do not buy articles of consumption with money, the circulating medium with which we pay for them. We must in the first instance have bought this money itself by the sale of our produce.

To a proprietor of a mine, the silver money is a produce with which he buys what he has occasion for. To all those through whose hands this silver afterwards passes, it is only the price of the produce which they themselves have raised by means of their property in land, their capitals, or their industry. In selling them they in the first place exchange them for money, and afterwards they exchange the money for articles of consumption. It is therefore really and absolutely with their produce that they make their purchases: therefore it is impossible for them to purchase any articles whatever, to a greater amount than those they have produced, either by themselves or through the means of their capital or their land.

From these premises I have drawn a conclusion which appears to me evident, but the consequences of which appear to have alarmed you. I had said — As no one can purchase the produce of another except with his own produce, as the amount for which we can buy is equal to that which we can produce, the more we can produce the more we can purchase. From whence proceeds this other conclusion, which you refuse to admit — That if certain commodities do not sell, it is because others are not produced, and that it is the raising produce alone which opens a market for the sale of produce.

I know that this proposition has a paradoxical complexion, which creates a prejudice against it. I know that one has much greater reason to expect to be supported by vulgar prejudices, when one asserts that the cause of too much produce is because all the world is employed in raising it. — That instead of continually producing, one ought to multiply barren consumptions, and expend the old capital instead of accumulating new. This doctrine has, indeed, probability on its side; it can be supported by arguments, facts may be interpreted in its favor. But, Sir, when Copernicus and Galileo taught, for the first time, that the sun, although we see it rise every morning in the east, magnificently pass over our heads at noon, and precipitate itself towards the west in the evening, still does not move from its place, they had also universal prejudice against them, the opinions of the Ancients, and the evidence of the senses. Ought they on that account to relinquish those demonstrations which were produced by a sound judgment? I should do you an injustice to doubt your answer.

Besides, when I assert that produce opens a vent for produce; that the means of industry, whatever they may be, left to themselves, always incline themselves to those articles which are the most necessary to nations, and that these necessary articles create at the same time fresh populations, and fresh enjoyments for those populations, all probability is not against me.

Or — as was summarized in a rather misleading way — “Production equals income.  Therefore, suppy generates its own demand, and demand its own supply.”

Say’s whole explanation very accurately describes the difference between today’s prevailing “Currency Principle” and the correct “Banking Principle” . . . which we will discuss in the next posting on this subject.