If yesterday’s posting didn’t reduce you to raging incoherency . . . there might just be hope for you yet.  If, however, you’ve been spending your time breathing threats and imprecations as you prepare to extirpate all heresy in thought, word, and deed (“No one expects the Spanish Inquisition!”), you might need a reboot of your reason app., and a shift from faith, to reason illuminated and guided by faith in your understanding of the natural law, especially as applied to political science and economics.

In the latter half of the nineteenth century, at a time when the last vestiges of noblesse oblige were rapidly disappearing from England, the totalitarian Nation-State philosophy of Thomas Hobbes was updated and presented by Walter Bagehot in The English Constitution (1867). This was followed in 1873 by Lombard Street, in which Bagehot applied the political philosophy expounded in The English Constitution to the financial markets of the City of London.  And influenced the development of Keynesian economics. . . . (John Maynard Keynes, “The Works of Bagehot,” The Economic Journal, 25:369–375 (1915).)

Briefly, Bagehot’s premise in The English Constitution was that the real power in England is vested in the House of Commons, which in his day was controlled by the financial élite through manipulation of the “rotten borough” system.  Under the rotten or “pocket” borough system, large population centers sometimes had less than a dozen eligible voters, who could easily be controlled at very little expense.

Everything else, from the queen (“a retired widow”), the Prince of Wales (“an unemployed youth”), the House of Lords, and even Magna Charta was “dignified,” rather than “expedient,” i.e., so much window dressing to keep the stupid masses more or less contented and in their place.  (If you don’t believe that Bagehot said exactly that, get yourself a copy of The English Constitution and have yourself a quick read.)

Bagehot applied these principles to the money and credit system in Lombard Street, still considered by many authorities to be the first, if not the last word in sound principle for the financial markets.  All money, instead of being created by accepting a bill drawn on the present value of existing and future marketable goods and services (“discounting and rediscounting”) as the medium of exchange, is instead created by the State by fiat.

Instead of the amount of money in the economy being determined by the present value of existing and future marketable goods and services in which the issuer of the money has a private property stake, private property is effectively abolished.  This is done by having the State back the money supply with the present value of future tax revenues — in which it does not have a private property stake.  In more understandable terms, the State redefines money from “anything that can be accepted in settlement of a debt,” to “whatever the State says it is.”  By asserting and maintaining control over money and credit, the State establishes absolute power.

As a number of rather astute individuals have pointed out over the centuries, power tends to corrupt.  Absolute power corrupts absolutely.  As far as Robert Hugh Benson was concerned, the corruption that began with the Reformation in England had reached its inevitable conclusion by the end of the nineteenth century. The upper classes of England had a doom hanging over their heads, although Benson was never able to explain in any definite way the exact nature of the catastrophe he saw coming.

We could, of course, go on at great length as to why, although we believe Benson’s intuition was correct, his reasoning was a little off.  That, however, is not the point.  The fact is that Benson understood, in however distorted a fashion, that something was seriously wrong with the world.  He correctly identified the underlying cause: abandonment of the sound moral philosophy taught by the Catholic Church and other reason-based systems, and submission to the ideological colonization of secular humanism and pure moral relativism spread by people such as Msgr. John A. Ryan.

Significantly, in his satiric masterpiece, Lord of the World, Benson had the western “Christian” nations abandoning every vestige of the natural moral law along with Christianity, while the sole remaining catechumen (someone receiving instruction to enter the Catholic Church) at the end of the book is an obviously sincere Muslim.  This suggests that Benson viewed orthodox Muslims who accept the Aristotelian/Thomist understanding of the natural moral law as closer to the truth than apostate or heretical Christians who reject it.

Benson knew that something had to be done if the world was to avert disaster — discern and live up to one’s vocation to the best of one’s ability.  That, of course, takes power — and power takes property.  If, as both Leo XIII and Pius XI pointed out, ordinary people lack capital ownership, then only the rich and upper classes will have the means to acquire and develop virtue by pursuing their vocations . . . in a world in which those same rich and upper classes had lost any desire to do anything of the sort.

The rest of Benson’s work contains a lot of detail, especially about religion, with which we may or may not agree.  Such is Benson’s skill as a novelist, however, that we don’t have to agree with the details, even religious details.  Wisely, Benson presented his ideas in fictional form, and we can suspend any disbelief we might have while we are entertained, and certainly run the risk of learning something about the world, other people, and, most of all, ourselves. 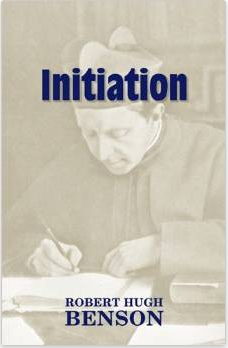 That tells us about Benson’s work.  We’ve been getting a few enquiries about Benson the man and the writer, not just his ideas, though.  If the spirit moves us, then, we might give a little more in that vein next week.  Otherwise, you can satisfy your Benson cravings by reading him, rather than about him:

The Fiction of John Henry Newman