Obviously the big news this week is Nelson Mandela.  The media, of course, are full of comments by people who met with him, talked with him, saw him on TV, saw a move about him, or some such thing.  Everyone is saying what a great man he was, but no one seems to grasp the essence of his greatness: he was a man of principle.


That’s easy to say, but not easy to explain.  Mandela started out a communist and advocated violence.  He ended up at the other end of the spectrum.  This tells us that he was more interested in the goal than in the means by which the goal is reached; rejecting a viable alternative because “it isn’t my way” would, in all likelihood, have been a completely baffling reaction to him.  Does it really matter how you establish and maintain peace and justice as long as the means used are ethical and don’t contradict themselves?  Or is it more important that your ego be gratified?

There have been people who had the opportunity to present the Just Third Way to prime movers such as Mandela and did nothing (Mandela being the prime mover who was kept in the dark by people who knew of the Just Third Way and could have told him).  They were far more interested in a photo op with a great man than in letting him know about a proposal that might have made him even greater.  In other words, they blew their own chance at immortality to try and gain it through their own efforts.

In any event, here are this week’s news items: 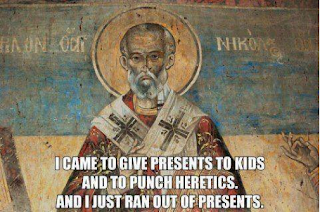 • Today is the “Feast” of Saint Nicholas of Myra, the original Santa Claus, and patron saint of micro-lenders (i.e., pawnbrokers) and bankers in general.  And of thieves, children, and unmarried women, so don’t read too much into the thieves and bankers coincidence.  Pawning is, of course, a form of deposit banking, in which the borrower takes out a small loan at high rates of interest, leaving a “moveable chattel” as collateral.  This is in contrast to “commercial” or “mercantile” banking in which the lender gives a promissory note for a bill of exchange issued by the borrower representing the present value of future marketable goods and services.  Instead of “interest,” which can only be charged on existing savings, the lender accepts the bill at a discount determined by the risk and other factors.  The difference between the face value and the discounted value (assuming the bill is redeemed or “paid” on maturity at the face value) is the fee out of which the lender meets his costs and makes a profit.  If capital credit insurance and reinsurance is used to replace traditional collateral, classic commercial banking represents a feasible source of financing for widespread ownership using future savings instead of past savings.  Thus, in a sense, Saint Nicholas could be called the patron saint of the Just Third Way.  Oh, by the way, Saint Nicholas is also noted for (apocryphally) punching out Bishop Arius for refusing to stop spouting nonsense during the Council of Nicea, A.D. 325.  And Chesterton believed Aquinas was thinking combatively.  “Jolly Old Elf” my foot. 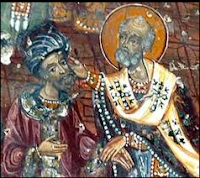 • When he was a college student, Theodore Roosevelt taught a Sunday School class.  Briefly.  He gave a dollar to one of the boys who protected the girls from a bully who was tormenting them.  The congregation objected to Roosevelt’s encouraging such “un-Christian behavior” and fired the future president.  One wonders if Jesus would have been kept on after He advocated tying millstones to people’s necks and throwing them into the sea for misleading people, saying they should never have been born, or for making a whip and driving the moneychangers out of the Temple for thieving.

• We’ve made some more additions to the blog.  It’s now much easier to obtain copies of some of CESJ’s and others’ publications.  Just click on the images.

• We received an unsolicited endorsement of Freedom Under God yesterday.  A blog posting had been copied (with permission, of course) to “Christian Concepts Daily” website, and was re-re-posted to some LinkedIn groups.  One participant, Deacon Joseph Gorini, commented that he liked the article (it agreed with his basic approach found on his website), but it didn’t go far enough.  He recommended that we read the Just Third Way Edition of Freedom Under God. . . . It turns out that Deacon Gorini is with the Confraternity of Catholic Clergy, the vice president of which, Monsignor Sal Pilato of the Archdiocese of Los Angeles, endorsed Freedom Under God.  What a coincidence!

• The big news is still that Freedom Under God is available after nearly three-quarters of a century.  CESJ is now taking bulk/wholesale orders (please, no individual sales).  The per unit price for ten or more copies is $16.00 (20% discount).  Shipping is extra.  Send an e-mail to “publications [at] cesj [dot] org” stating how many copies you want and the street address (no P. O. Boxes) where you want them delivered.  We will get back to you with the total cost, how to pay, and estimated delivery time.  All payments must be made in advance, and orders are placed only after payment clears.  Individual copies are available from Amazon and Barnes and Noble, as well as by special order from many bookstores.

• So Much Generosity, the collection of essays about the fiction of Nicholas Cardinal Wiseman, John Henry Cardinal Newman, and Monsignor Robert Hugh Benson by Michael D. Greaney, CESJ’s Director of Research.  The book is now available on Amazon and Barnes and Noble, and is also available on Kindle. Many of the essays incorporate elements of the Just Third Way.  The book is priced at $20.00, and there is a 20% discount on bulk orders (i.e., ten or more), which can be ordered by sending an e-mail to publications [at] cesj [dot] org.