This is a delicate question, with something of a "My Way Or The Highway" attitude on the part of the ACLU, which brought the suit. The ACLU alleged that "offering . . . a Choose Life license plate in the absence of a pro-choice plate constitutes viewpoint discrimination in violation of the First Amendment."

Chris Brook, legal director of the ACLU-NCLF, declared that the government cannot create an avenue to express one side of a political issue while denying an equal opportunity to citizens with an opposing view.

We agree. For years we have argued that government at any level should not give financial support to Pro-Choice groups while denying both financial support and free speech to Pro-Life groups. As we explain in Supporting Life, there is something profoundly wrong in denying citizens free choice in how their tax money is spent.

Take, for example, government money provided to Planned Parenthood. This is justified by claiming that the money is not used for abortion.

This is untrue. Government funds provided for any Planned Parenthood operation or program of any kind frees money for abortion that would otherwise have been spent on, say, prenatal healthcare for those women who go to a Planned Parenthood clinic for something other than an abortion. The specific funds provided by the government may not be used directly for abortion — but money is "fungible." It allows other money to be used for abortion. Taxpayers are forced into the Hobson's choice of paying for abortion due to unfamiliarity with basic accounting and legal principles and legislative sleight-of-hand.

The benefits are obvious. For one thing, instead of $15, the donation would be $20 — the centers get more, and the donor would pay less than for a license plate. The donor wouldn't have to be a motorist to make a donation and get the sticker, either. Nor would he or she have to put it on an automobile. It could as easily be put on a bicycle, little red wagon, stroller, or human rear end. Nor would anyone be restricted to a single bumper sticker. Just make any number of donations of $20 or more.

Freedom of speech? Why not? The organized centers can print up a batch of "Respect Choice" bumper stickers. If a donor specifies that he or she prefers that instead of "Choose Life," fine. The pregnancy centers still get the money, and the donor demonstrates that he or she truly respects genuine choice by providing hard, cold cash to an alternative instead of empty rhetoric.

That, or residents of the Tar Heel state can move their businesses to the somewhat more hospitable clime of Indiana, where judges evidently don't have a problem with license plates such as this: 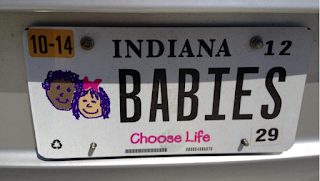