A Taxing Problem: Rule of Law


Abolishing the income tax sounds great at first glance.  Nobody likes to pay taxes anyway, and all the expletive deleted recordkeeping, penalties, interest, weird requirements, etc., etc., etc., only add insult to injury.  So why not have a national consumption tax of some kind instead of an income tax?  The regulatory burden would be much less, and everybody’s life would be much simpler, wouldn’t it?


That is the argument John H. Cochrane, a Senior Fellow at Stanford University’s Hoover Institution and Adjunct Scholar at the Cato Institute, makes in his opinion piece in yesterday’s Wall Street Journal, “Tax Consumption Through a VAT, and Voilà” (WSJ, 09/05/17, A15).  Life would be so much simpler with a consumption tax.
Simpler maybe — but not easier.  Let’s take the most obvious problem with it: it’s regressive.
“Stop right there!” advocates say.  “We’ve got you covered! —”
What about progressivity?  It is easy to make a value-added tax progressive: In place of current exemptions, send everyone a $10,000 check.  Or people could receive a refund according to how much they spend, similar to income-tax refunds.  Taxpayers could get a full refund for the first $10,000, half for the next $10,000, and so forth.  Electronic record-keeping makes this straightforward — it’s just a big debt or credit card reward — and everyone would have an incentive to report purchases rather than to hide income.
Does everyone see the Big Problem here?  If you don’t, here’s a hint:
With an income tax, you report on how much you earned, subtract exemptions, deductions, and whatever, then calculate and pay a tax based on that.  First you earn, then you pay the tax.  If you overestimate your taxes, you get a refund.  If you underestimate, you pay more (and if you really underestimate, pay a penalty and interest).
With a consumption tax, you first pay the tax, then calculate how much you owe.  If you overpaid, you get a refund.  You can’t underpay, so no penalties or interest.  Sounds really good, no?
It sounds really good, no.  Persuade the government to give you back money based on your word alone?  Hardly.  The government is going to want proof that you spent as much money as you say you did — and if it doesn’t get it, you don’t get that $10,000 or whatever.
With an income tax, you can argue how much you owe the government.  Ultimately, it’s up to the government to prove you didn’t pay enough.  Yes, sometimes it looks as if you’re guilty until proven innocent, but the IRS really does have to have a reason to go after you, or their butts are in a sling.  BIG time — judges hate to pay taxes just as much as you do, and they tend to look askance at even government lawyers who try to throw their weight around in court.  Don’t do it.  A tax lawyer friend of ours thought he could do it, and almost got disbarred.
With a consumption tax, especially with a refund, it’s up to you to prove that you paid at all!  The government already has your money, and you have to make the case to get it back.  You are, essentially, put in the position of having to prove yourself innocent or (what is really the case) “not guilty.”
. . . and that is logically impossible.  You cannot prove that you are not guilty.  It is up to your accuser to prove that you are guilty.  Otherwise, it’s demanding that you prove the existence of something that does not exist: “non guilt.”  It is the first principle of reason that you cannot prove the existence of non-existence!!!!!!!!!!  It’s a “contradiction in terms.”  Nothing can both “be” and “not be” at the same time under the same conditions.  Period.  End of story. 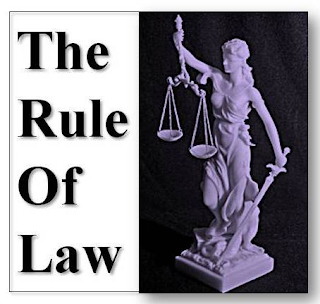 Prove that you did not spend money?  Not in any system that claims to be just under rule of law.
“Rule of law” doesn’t mean that you just have a bunch of laws.  Every society has laws, especially totalitarian ones.  It may even have been Cicero, one of the greatest lawyers of all time, who said that as the number of laws increases, so does injustice.
No, “rule of law” means that you have a just system of laws bound by a rational and consistent legal philosophy consistent with the natural law based on reason, not the lawmakers’ arbitrary whim.  This is what philosophers call lex ratio, “law is reason,” as opposed to lex voluntas, or “law is will” . . . which somehow always ends up reverting to lex talonis, or “law of the claw,” which is a rather poetic term for something very unpoetic: law of the jungle, might makes right, rule by the strongest.
So, you want a European-style Value Added Tax (VAT)?  Sure . . . if you want to complete the transition from American Revolution, sovereignty of the human person, natural law democracy, to arbitrary French Revolution, sovereignty of the collective democracy.
And you thought it was just an easier way to finance government.
But wait!  There’s more!  And we’ll get to that tomorrow.
#30#
Posted by Michael D. Greaney at 6:00 AM