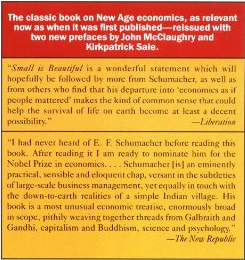 Another fascinating fact is that E.F. Schumacher, whose books Small Is Beautiful (1973) (billed as the “The Classic Book on New Age Economics”), and A Guide for the Perplexed (1977) are held in great esteem by today’s distributists and Chestertonians, was a member of the Fabian Society, and wrote a number of tracts for them.  Schumacher was a protégé of John Maynard Keynes, alleged to be a secret member of the Fabian Society, although the evidence presented for this is not very convincing.  (If Keynes was a secret member, it’s still a secret.)
Delving into the programs advocated by the Fabians, and their remarkable efforts to reach out to people of all faiths and philosophies — as long as they bought into the Fabian variety of socialism — one is struck by the dissimilarity of yesterday’s distributism and Fabian socialism, and the similarity of the two today.  It becomes easier to understand just why Pope Pius XI might have been so worried about all forms of socialism, not just those deemed “bad” socialism by the adherents of presumably “good” socialism.  As he said in his landmark encyclical, Quadragesimo Anno (1931),
117. But what if Socialism has really been so tempered and modified as to the class struggle and private ownership that there is in it no longer anything to be censured on these points? Has it thereby renounced its contradictory nature to the Christian religion? This is the question that holds many minds in suspense. And numerous are the Catholics who, although they clearly understand that Christian principles can never be abandoned or diminished seem to turn their eyes to the Holy See and earnestly beseech Us to decide whether this form of Socialism has so far recovered from false doctrines that it can be accepted without the sacrifice of any Christian principle and in a certain sense be baptized. That We, in keeping with Our fatherly solicitude, may answer their petitions, We make this pronouncement: Whether considered as a doctrine, or an historical fact, or a movement, Socialism, if it remains truly Socialism, even after it has yielded to truth and justice on the points which we have mentioned, cannot be reconciled with the teachings of the Catholic Church because its concept of society itself is utterly foreign to Christian truth.
118. For, according to Christian teaching, man, endowed with a social nature, is placed on this earth so that by leading a life in society and under an authority ordained of God he may fully cultivate and develop all his faculties unto the praise and glory of his Creator; and that by faithfully fulfilling the duties of his craft or other calling he may obtain for himself temporal and at the same time eternal happiness. Socialism, on the other hand, wholly ignoring and indifferent to this sublime end of both man and society, affirms that human association has been instituted for the sake of material advantage alone.
119. Because of the fact that goods are produced more efficiently by a suitable division of labor than by the scattered efforts of individuals, socialists infer that economic activity, only the material ends of which enter into their thinking, ought of necessity to be carried on socially. Because of this necessity, they hold that men are obliged, with respect to the producing of goods, to surrender and subject themselves entirely to society. Indeed, possession of the greatest possible supply of things that serve the advantages of this life is considered of such great importance that the higher goods of man, liberty not excepted, must take a secondary place and even be sacrificed to the demands of the most efficient production of goods. This damage to human dignity, undergone in the “socialized” process of production, will be easily offset, they say, by the abundance of socially produced goods which will pour out in profusion to individuals to be used freely at their pleasure for comforts and cultural development. Society, therefore, as Socialism conceives it, can on the one hand neither exist nor be thought of without an obviously excessive use of force; on the other hand, it fosters a liberty no less false, since there is no place in it for true social authority, which rests not on temporal and material advantages but descends from God alone, the Creator and last end of all things.
120. If Socialism, like all errors, contains some truth (which, moreover, the Supreme Pontiffs have never denied), it is based nevertheless on a theory of human society peculiar to itself and irreconcilable with true Christianity. Religious socialism, Christian socialism, are contradictory terms; no one can be at the same time a good Catholic and a true socialist.
Good socialism?  Bad socialism?
No.
As the Fabians themselves insisted, just socialism.
#30#
Michael D. Greaney at 6:00 AM
Share
‹
›
Home
View web version