As always seems to happen this time of year, things are put on a back burner while the weather goes on the front burner (so to speak).  We could, of course, go on at great length about the current crop of presidential candidates, but once we’ve pointed out that they are totally oblivious to anything even faintly resembling the platform of the Unite America Party (no affiliation with CESJ, but CESJ members had massive input to the platform . . . which all candidates from all parties for office anywhere in the world are encouraged to steal), you’ve pretty much said it all, at least as far as we are concerned.  Other than that:


• Members of the CESJ core group attended a lecture/book signing presented by the Hudson Institute on Thursday.  The speaker was Dr. Randy F. Barnett of the Georgetown University Law School.  His topic was “Our Republican Constitution: Securing the Liberty and Sovereignty of We the People,” which is also the title of his recently published book. 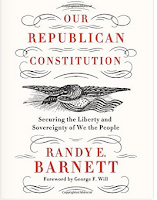 • Dr. Barnett’s contention is that neither the liberals nor the conservatives understand the U.S. Constitution, a point with which, of course, we were not going to disagree.  The only difference between the two is that the liberals tend to view the power of the Supreme Court to make law as unlimited, depending only on what the majority want (or, in our opinion, what those in power can force on others), while the conservatives tend to view the power of the Court to make law as subject to limits.  No one seems to consider the possibility that the Constitution is not the law of the land limiting the powers of the people, but the law of the Republic, limiting the powers of the State.  The Congress is supposed to make laws for people, bound by the Constitution that limits its power to do so, especially the Ninth and Tenth Amendments, reinforced with the Fourteenth.
• Speaking of the Fourteenth Amendment, we recently got into another discussion involving tactics of the Pro-Life Movement.  Apparently Mike Pence, Donald Trump’s pick for VP, has declared he will overturn Roe v. Wade.  Interesting, if he could do it, but probably not realistic.  There are two factors that many people ignore.  One, the problem is not Roe v. Wade.  Overturning it would change nothing.  No, really.  Two, the real problem is that ordinary people lack power, and they lack power because they don’t own capital.  If you want fundamental and sustainable social change, you need power.
• CESJ’s latest book, Easter Witness: From Broken Dream to a New Vision for Ireland, is available from Amazon and Barnes and Noble, as well as by special order from many “regular” bookstores.  The book can also be ordered in bulk, which we define as ten copies or more of the same title, at a 20% discount.  A full case is twenty-six copies, and non-institutional/non-vendor purchasers get a 20% discount off the $20 cover price on wholesale lots ($416/case).  Shipping is extra.  Send enquiries to publications@cesj.org.  An additional discount may be available for institutions such as schools, clubs, and other organizations as well as retailers.
• Here’s the usual announcement about the Amazon Smile program, albeit moved to the bottom of the page so you don’t get tired of seeing it.  To participate in the Amazon Smile program for CESJ, go to https://smile.amazon.com/.  Next, sign in to your account.  (If you don’t have an account with Amazon, you can create one by clicking on the tiny little link below the “Sign in using our secure server” button.)  Once you have signed into your account, you need to select CESJ as your charity — and you have to be careful to do it exactly this way: in the space provided for “Or select your own charitable organization” type “Center for Economic and Social Justice Arlington.”  If you type anything else, you will either get no results or more than you want to sift through.  Once you’ve typed (or copied and pasted) “Center for Economic and Social Justice Arlington” into the space provided, hit “Select” — and you will be taken to the Amazon shopping site, all ready to go.
• As of this morning, we have had visitors from 44 different countries and 46 states and provinces in the United States and Canada to this blog over the past two months. Most visitors are from the United States, the United Kingdom, Germany, the Philippines, and India. The most popular postings this past week in descending order were “Book Review: A Field Guide for the Hero’s Journey,” “Why Did Nixon Take the Dollar Off the Gold Standard?” “News from the Network, Vol. 9, No. 28,” “A Brief Outline of How to Save the World (and Other Modest Goals),” and “Future Schacht, I: A Sound Money System.”
Those are the happenings for this week, at least those that we know about.  If you have an accomplishment that you think should be listed, send us a note about it at mgreaney [at] cesj [dot] org, and we’ll see that it gets into the next “issue.”  If you have a short (250-400 word) comment on a specific posting, please enter your comments in the blog — do not send them to us to post for you.  All comments are moderated, so we’ll see it before it goes up.
#30#
Michael D. Greaney at 1:01 PM
Share
‹
›
Home
View web version