While world leaders ponder how to make the hole deeper that they’ve been getting the world into since governments began controlling money and credit for their own political purposes instead of the economic needs of actual people, there are a few bright spots on the horizon (if that’s not mixing metaphors or something).  They are only tiny points of light at this point, but still it’s something::


• South Africa Goes Worker Owned?  Last month the African National Congress (ANC) released its “election manifesto” (party platform — sort of).  The manifesto calls for the party to “[i]ntroduce legislation for the extension of company ownership to a broad base of workers through an employee ownership scheme and similar arrangements to supplement workers' incomes and build greater partnerships between workers and owners to build these businesses.”  Some time back, CESJ president Dr. Norman Kurland recommended worker ownership in South Africa.  It has taken a few decades, but it seems they are finally getting around to it.
• Presidential Candidate for Ownership?  Democratic Senator Kirsten Gillibrand of New York has announced she is running for president, and in her “announcement video” mentions her support for employee ownership and the Main Street Employee Ownership Act.  Of course, if she really wanted to come out like another Lincoln, she would support ownership for every child, woman, and man, not just those fortunate enough to find a wage system job.
• Starbuck for President?  Another presidential possibility, Howard Schultz, founder and past CEO of the Starbucks coffee house chain, has generated a lot of media buzz over the possibility of his running for President as an independent. Schultz was a proponent of employee ownership — sort of. Schultz wanted to give stock options with a face value of 10% of pay to all employees, including part-timers, who worked for six months or more. Starbucks asked us for data to support the idea that broad-based ownership worked, and that may have helped mollify the bankers. The program now uses “restricted stock units.” The units vest over two years at 50% per year. Grants are awarded to all employees annually. Since inception, the program has awarded over $1.2 billion in shares to employees.  While this does spread a little ownership, it is in the nature of a gift that can be taken away, not a right exercised by the workers.

• Maryland Worker Ownership.  Although it’s a bit tokenistic and doesn’t get to the main problem (access to money and credit so anybody can purchase self-liquidating assets), A bill introduced in the Maryland House would exempt from taxes a portion of income from a transfer of stock in a corporation or LLC to workers.  The bill, introduced by Eric Luedtke, builds on similar legislation introduced last session in the Maryland Senate. 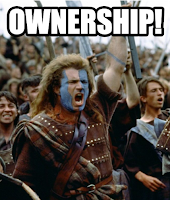 • Scotland the Brave.  In a bold move that breaks with Labour’s Fabian traditions, the leader of the Labour Party of Scotland has called for more emphasis on employee ownership in Scotland, including giving workers a statutory preferential right to buy a company when it is put up for sale. Derek McKay, Finance Minister of the ruling Scottish National Party, said, “We will intervene where we can when there’s [’re?] ways we can support companies and the workforce and we do have that desire, as Richard Leonard [party leader] has set out, for more employee-owned companies.”  Again, why just workers?  But at least it’s a step in the right direction.
• Shop online and support CESJ’s work! Did you know that by making your purchases through the Amazon Smile program, Amazon will make a contribution to CESJ? Here’s how: First, go to https://smile.amazon.com/.  Next, sign in to your Amazon account.  (If you don’t have an account with Amazon, you can create one by clicking on the tiny little link below the “Sign in using our secure server” button.)  Once you have signed into your account, you need to select CESJ as your charity — and you have to be careful to do it exactly this way: in the space provided for “Or select your own charitable organization” type “Center for Economic and Social Justice Arlington.”  If you type anything else, you will either get no results or more than you want to sift through.  Once you’ve typed (or copied and pasted) “Center for Economic and Social Justice Arlington” into the space provided, hit “Select” — and you will be taken to the Amazon shopping site, all ready to go.
• Blog Readership.  We have had visitors from 41 different countries and 48 states and provinces in the United States and Canada to this blog over the past week. Most visitors are from the United States, Canada, Brazil, Kenya, and Australia.  The most popular postings this past week in descending order were “The American Chesterton,” “Fulton Sheen and the Problem of Savings,” “Thomas Hobbes on Private Property,” “New Things, Part I,” and “Ronald Reagan . . . Communist?”
Those are the happenings for this week, at least those that we know about.  If you have an accomplishment that you think should be listed, send us a note about it at mgreaney [at] cesj [dot] org, and we’ll see that it gets into the next “issue.”  If you have a short (250-400 word) comment on a specific posting, please enter your comments in the blog — do not send them to us to post for you.  All comments are moderated, so we’ll see it before it goes up.
#30#
Michael D. Greaney at 6:00 AM
Share
‹
›
Home
View web version