According to Reuters news service, Nestlé, the chocolate maker, has announced a buyback of its outstanding shares of up to 20 billion Swiss francs (cir. $20.79 billion) over the next three years.  How much they actually buy back will depend on market conditions, share price, and so on. 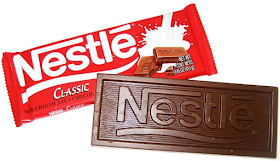 Sounds good, doesn’t it?  We mean the buyback, too.  The candy is always good.
Or does it?  Let’s think about that a bit.
At first glance a share buyback sounds good for investors.  It puts upward pressure on the value per share, allowing anyone with a sizable stake in the company to make out pretty well.
. . . by selling their shares.  One of the problems with selling shares to make money on them is that you are no longer an owner of the shares.  You are a former owner.  The best you can do is take the money and see if you can find an equivalent investment in something else.  Hershey’s?  Nestlé tried to buy them.  Curtis?  Nestlé bought them.
Anyway, that’s not even the main problem in a share buyback.  It’s the money . . . as in, whose money is it?  Nestlé is going to use $20 billion or so to buy shares in itself from shareholders, meaning the owners of Nestlé.
It doesn’t take a genius to see what’s going on here.  The shareholders own Nestlé.  That means that they own what Nestlé owns, which includes the cash that will be used to buyback the shares.
Are you getting the picture?  Instead of paying out the cash that belongs to the shareholders to the shareholders in the form of dividends, Nestlé is going to use cash that belongs to the shareholders to buy shares from the shareholders.
Nestlé will be buying shares from shareholders with money that already belongs to the shareholders!  It’s as if someone borrows $100.00 from you, and pays it back with $100.00 he collected on your behalf from someone else.  Instead of the $200.00 that is due you, you only get $100.00.
And nobody sees anything wrong in this? N-E-S-T-L-E-S, Nestlé's pulls the very best buuuuuy-backs!
#30#
Michael D. Greaney at 6:00 AM
Share
‹
›
Home
View web version